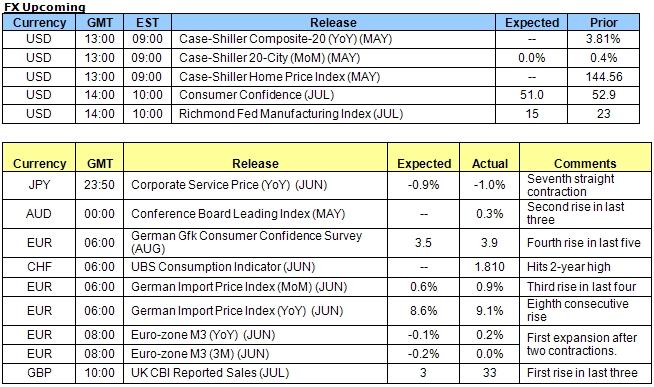 The Basel Committee on Banking Supervision announced it would set a leverage ratio which would apply to banks worldwide, but will allow “some prudent recognition” on deferred tax assets as well as minority interest held at other financial institutions as capital.

The committee plans to introduce a 3% leverage ratio, which could take effect in 2018, while the “Governors and Heads of Supervision also agreed on the Basel Committee’s concrete proposals to recalibrate the stress scenarios to achieve a conservative bank level and plausibly severe system wide shock.” In response to the new measures, European Central Bank President Jean-Claude Trichet said global policy makers “have ensured that the reforms are rigorous and promote the long-term stability of the banking system,” and went onto say that the new initiatives are a “landmark achievement to strengthen banking sector resilience.” Nevertheless, the economic docket showed consumer confidence in Germany unexpectedly improved in August, with the GfK survey advancing to 3.9 from a revised 3.6 in the previous month, while import prices in Europe’s largest economy increased at an annual pace of 9.1% in June to mark the fastest pace of growth since November 2000. As the outlook for growth and inflation improves, the European Central Bank may continue to raise its economic assessment over the coming months, but the Governing Council is likely to maintain a loose policy stance going into 2011 as governments operating under the single-currency target the budget deficit and tighten fiscal policy.

The British Pound continued to push higher as the economic docket reinforced an improved outlook for the region, with the exchange rising to a fresh monthly high of 1.5545 during the European trade, and the GBP/USD looks poised to push back above the 200-Day SMA at 1.5557 as it maintains the upward trending channel from the June low (1.4346). A report by the Confederation of British Industries showed retail sales in the U.K. grew at the fastest pace in more than three-years, with the gauge for household spending increasing to 33 in July from -5 in the previous month, and conditions may continue to improve going forward as the economic recovery gathers pace. Meanwhile, the Bank of England said that its Asset Purchase Facility earned GBP 8M in the year ending in February, but went onto say that the program had led to zero profit after taking administrative costs into consideration. As policy makers continue to see downside risks for the real economy, the BoE is widely expected to support the economy going forward as the new coalition in Britain withdraws support and cuts public spending.

U.S. dollar price action was relatively mixed overnight night, with the USD/JPY paring the previous day’s decline to reach a high of 87.46, and the reserve currency is likely to face increased volatility going into the North American trade as the market participants expect household sentiment in the world’s largest economy to weaken for the second consecutive month in July. The Conference Board’s consumer confidence index is anticipated to fall back to a four-month low of 51.0 in July from 52.9 in the previous month, and the data is likely to weigh on the outlook for future growth as private consumption accounts for more than two-thirds of the economy.