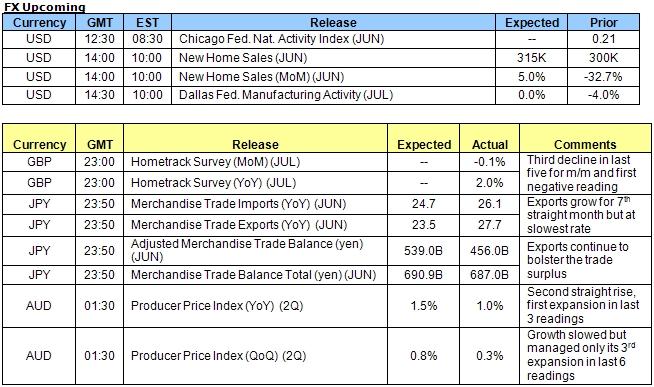 Meanwhile, European Central Bank board member Jose Manuel Gonzales-Paramo said that the stress tests were very demanding during a radio interview and said that he’s satisfies with the outcome as it reveals the strength of the European banking system.

At the same time, Governing Council member Athanasios Orphanides concluded that the “results of the exercise confirm the robustness of the European system” during a press conference in Nicosia, and expects to see “further normalization” in European bond yield spreads as the central bank take unprecedented steps to mitigate the downside risks for the region. Meanwhile, regulators in Germany, including the Bundesbank said they have no plans to conduct the stress test on a regular basis according to an article in the Handelsblatt newspaper, and argued that the time and effort it takes to implement such measures are not worth the insight gained from the investigations. As investors remain skeptical of the stress test, with market participants looking for increased clarification behind the procedure, concerns underlying the European banking system may continue to drag on the exchange rate and may confine the euro going forward as price action fails to hold above 1.3000.

The British Pound extended the rally from the previous week, with the GBP/USD rallying to a high of 1.5507, and the pair looks poised to test the 200-Day SMA at 1.5561 as it maintains the upward trend from the June low (1.4346). Meanwhile, U.K. Treasury Minister Mark Hoban unveiled a new proposal where the Bank of England will obtain new powers over the financial system, which include oversight of banks and clearinghouses, and said the new unit within the BoE will meet at least four times a year to monitor risk and deliver consumer protection. Nevertheless, the Home track housing survey showed home prices slumped 0.1% in July to mark the first decline in 15-months, with the annualized rate falling back to 2.0% from 2.1% in the previous month, and the group said that the drop in prices reflects a “turning point for the housing market” as tightening fiscal policy weighs on the recovery. As the economy struggles to brush off the recession, the BoE is widely expected to maintain a loose policy over the coming months, but the MPC may see scope to normalize policy going into the following year as the stickiness in consumer inflation becomes a increased concern for the central bank.

The greenback weakened across the board following the rise in risk appetite, with the USD/JPY slipping to a low of 87.00 during the overnight session, but market sentiment appears to be turning over as equity futures foreshadow a lower open for the U.S. market. Nevertheless, new home sales in the world’s largest economy is forecasted to increase 3.7% in June to an annualized pace of 311K after contracting 32.7% in the previous month, while the Dallas Fed's index for manufacturing is expected to contract another 2.5% in July after falling 4.0% in the month prior.