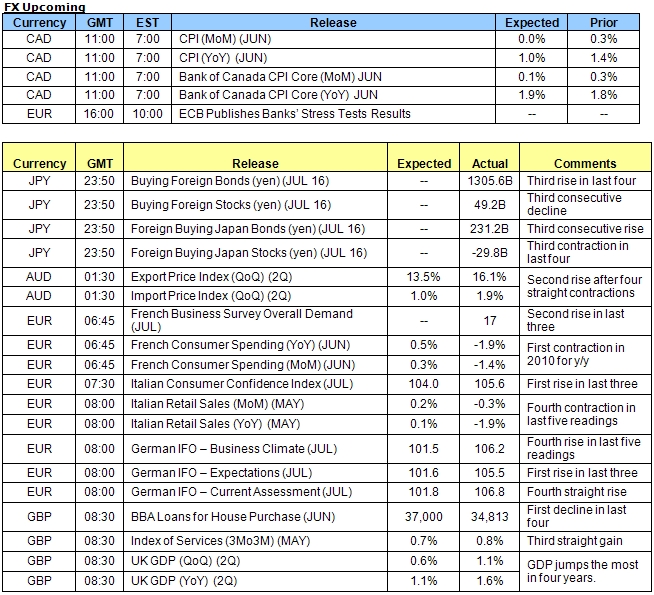 
However, a report by the British Bankers’ Association showed loans for home purchases unexpectedly slumped to 34.8K in June from a revised 36.4K in the previous month to mark the lowest reading since February, and the slack within the real economy may lead the Bank of England to maintain a dovish policy stance over the coming months as it aims to balance the downside risks for the region.

Economic activity in Britain expanded 1.1% in the second quarter, which exceeded forecasts for a 0.6% rise, while the growth rate increased an annualized pace of 1.6% to mark the first positive reading since 2008, and the larger-than-expected rise in economic activity could give the BoE scope to normalize monetary policy going into the following year as price growth continues to hold above the government’s 3% limit for inflation. The breakdown of the report showed manufacturing increased at the fastest pace in over a decade, with construction surging 6.6% to mark the largest advance since 1963, while service-based activity, which accounts for more than two-thirds of the economy, expanded 0.9% from the first three-months of 2010. However, as the new coalition in the U.K. targets the budget deficit and tightens fiscal policy, the central bank may look to support the economy throughout the remainder of the year as the outlook for future growth remains clouded with uncertainties.

The Euro crossed back above the 100-Day SMA (1.2878) and surged to a high of 1.2965 following an unexpected rise in business confidence, and the single-currency is likely to face increased volatility later today as the European Central Bank is scheduled to release the results of the commercial bank stress test at 16:00 GMT. The German IFO business confidence survey increased to 106.2 in July from 101.8 amid forecasts for a decline to 101.5, with the gauge for future expectations advancing to 105.5 from a revised 102.5 in June, and businesses may turn increasingly optimistic going forward as the region benefits from the rebound in global trade. Nevertheless, as the stress test takes center stage, dismal results is likely to weigh on the exchange rate, which could stoke a sharp selloff in the euro-dollar, but even a lackluster outcome may keep the single-currency above the 100-Day SMA as the economic outlook improves.

U.S. dollar price action was mixed overnight, while the USD/JPY advancing to a high of 87.22 as the Japanese Yen weakened against most of its major counterparts, and the reserve currency is likely to face increased volatility later today following the results of the European stress test as investors weigh the outlook for the global financial system. However, the major currencies could face choppy price action as market liquidity thins ahead of the weekend, but the rise in risk appetite is likely to dictate price action going into the North American trade as equity futures foreshadow a higher open for the U.S. market.

US Dollar to Rise Against Yen, Decline vs Pound and Euro