However, the EUR/USD is likely to face increased volatility going into the end of the week as the European Central Bank is scheduled to release the results of the commercial bank stress test tomorrow at 16:00 GMT, and the ongoing weakness in the banking sector could lead the pair to retrace the advance from the yearly low (1.1879) as the outlook for future growth remains clouded with uncertainties.

The Euro-Zone advanced manufacturing PMI reading for July unexpectedly increased to a three-month high of 56.5 from 55.6 in the previous month, with the gauge for service-based activity advancing to 56.0 from 55.5 versus forecast for a drop to 55.0, while the composite index rose to 56.7 from 56.0 in June. At the same time, industrial new orders for the euro-region surged 3.8% in May amid projections for a 0.1% drop, while demands increased at an annual pace of 22.7% to mark the fastest pace of growth since 2000, and conditions are likely to improve going forward as the region continues to benefit from the rebound in global trade. However, as the European financial system remains weak, with governments operating under the fixed exchange rate system tightening fiscal policy, the ECB is likely to support the economy going forward as it aims to balance the risks for the region.

The British Pound pared the previous day’s decline and rallied to a high of 1.5289 following a larger-than-expected rise in retail sales, and the exchange rate may continue to push higher over the near-term as it maintains the upward trend from the June low (1.4346). Nevertheless, the economic docket showed household spending in the U.K. increased 0.7% in June to top forecasts for a 0.5% rise, while sales excluding auto fuel jumped 1.0% amid projections for a 0.6% advance. As the outlook for future growth improves, the Bank of England may increase its economic assessment and see scope to normalize monetary policy over the coming months as price growth continues to hold above the government’s 3% limit for inflation, but the ongoing slack within the real economy could lead the central bank to maintain a loose stance throughout the second-half of the year as it aims to encourage a sustainable recovery.

The greenback weakened across the board following a rebound in risk sentiment, and the dollar could face increased selling pressures throughout the North American trade as equity futures foreshadow a higher open for the U.S. market. However, dovish rhetoric from Fed Chairman Ben Bernanke should shake up market sentiment as he’s scheduled to testify in front of the House Financial Services Committee at 13:30 GMT, and any fresh commentary from the central bank head is likely to move the currency market as investors weigh the outlook for future growth. At the same time, the economic docket is expected to show existing home sales slum9.9% in June to an annualized pace of 5.10M from 5.66M in the previous month, while the home price index is forecasted to contract 0.3% in May after expanding 0.8% in the month prior. 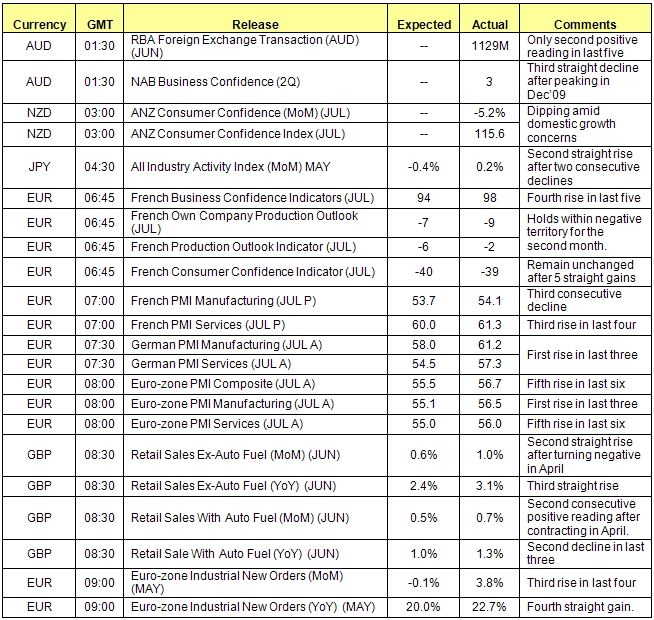