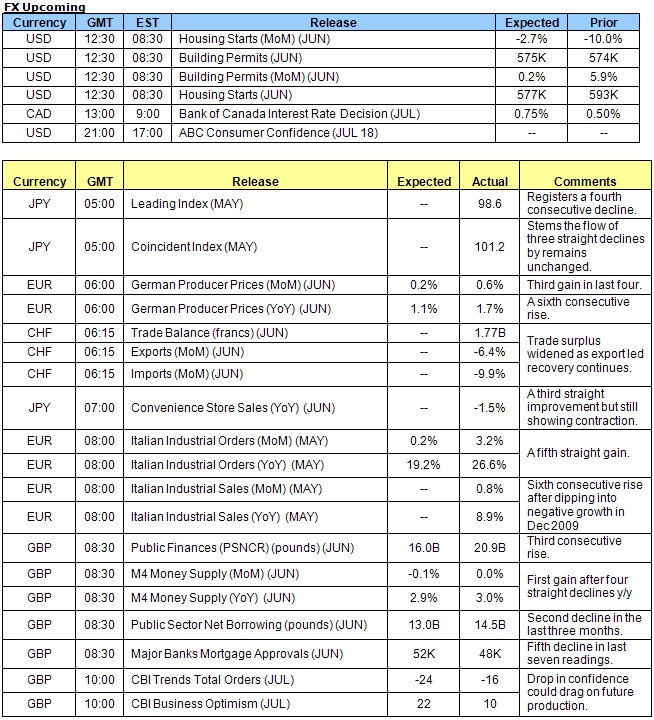 
A report by the Bank of England showed mortgage approvals by the major banks in Britain increased 48K in June after expanding 51K in the previous month, which fell short of expectations for a 52K rise, and the ongoing weakness in the private sector may lead the central bank to hold a dovish outlook for future policy as it aims to encourage a sustainable recovery.

The BoE said lending “continued to be constrained by the restrictions on mortgage finance,” with the major banks expecting “demand for secured lending to be flat over the rest of the year, partly reflecting weak confidence among potential homebuyers,” and the MPC may keep borrowing costs at the record-low over the coming months in an effort to stem the downside risks for the region. At the same time, public sector net borrowing in the U.K. jumped GBP 14.9B in June, which missed expectations for a GBP 13.0B deficit, while the M4 money supply held flat after falling a revised 0.1% in May. In addition, a report by the Confederation of British Industries showed its gauge for business optimism slipped to 10 in July from 24 in the previous month, while the index for industrial orders advanced to -16 from -23 in June. As the U.K. struggles to brush off the recession, the majority of the BoE is likely to maintain a dovish policy stance going forward, but we could see board member Andrew Sentance continue to push for a rate hike as the MPC is scheduled to release its policy meeting minutes tomorrow at 8:30 GMT.

The Euro pared the overnight advance and slipped to a low of 1.2888 ahead of the U.S. trade, and EUR/USD appears to be carving a near-term top as price action struggles to hold above the 100-Day SMA at 1.2901. Meanwhile, European Central Bank board member Ewald Nowotny said that the Governing Council will retain its asset purchase program “as a security measures” during an interview with Reuters TV, and talked down the risks for a double-dip recession as the economy continues to benefit from the rebound in global trade. As the European financial system remains fragile, with the governments operating under the single-currency struggling to manage their public finances, the ECB is likely to support the economy throughout 2010 in an effort to balance the risks for the region. Nevertheless, the economic docket showed producer prices in Germany jumped 0.6% in June after expanding 0.3% in the previous month, while the annualized rate increased 1.7% from the previous year to mark the fastest pace of growth since January 2009.

U.S. dollar price action was mixed once again, with the USD/JPY rallying to a high of 87.17, and the greenback is likely to face increased volatility going into the North American trade as the economic docket is expected to reinforce a mixed outlook for future growth. Housing starts in the world’s largest economy is projected to fall 2.7% in June to an annualized pace of 577K from 593K in the previous month, while building permits are forecasted to increase 0.2% to 575K during the same period. Meanwhile, the Bank of Canada is widely expected to increase the benchmark interest rate for the second consecutive month to 0.75% from 0.50% in June, and comments following the rate decision are likely to dictate price action for the USD/CAD as investors weigh the prospects for future policy.