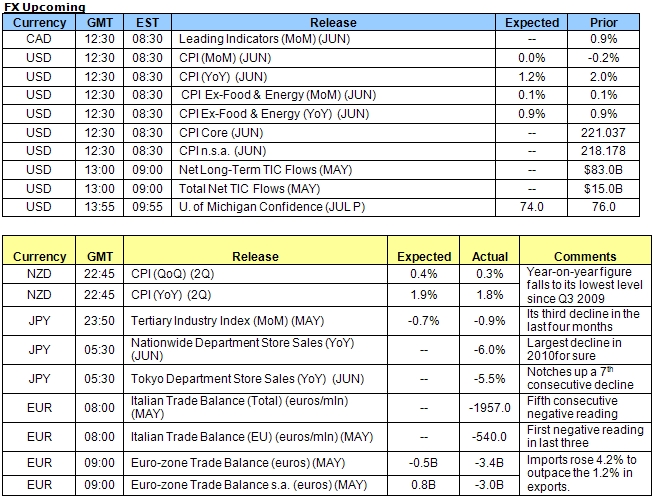 
European Central Bank board member Patrick Honohan said that the commercial bank stress test will help to increase transparency and “cool concerns about the banking system in Europe” while speaking at a press conference in Dublin, and said that the emergency measures carried out by the central bank will “be phased out when they are no longer deemed necessary.”

At the same time, Mr. Honohan noted the economic recovery in the Euro-Zone “is a good deal slower” than in other parts of the world, and went onto say that the ECB’s asset purchase program has had a “stabilizing effect” as policy makers try to combat the debt crisis. As the central bank is scheduled to release the outcome of the stress test on July 23, the euro could certainly face headwinds over the following week as the outlook for future growth remains clouded with uncertainties, and the central bank may look to support the economy throughout the second-half of the year as it aims to balance the risks for growth and inflation. Meanwhile, the economic docket showed the trade balance for the euro-region slipped into negative territory in May, with the data reflecting a EUR 3.0B deficit following a revised EUR 0.1B surplus in the previous month as a 4.2% rise in imports outpaced the 1.6% advance in foreign demands.

The British Pound pared the rally from earlier this week and slipped to a low of 1.5357 during the European trade as investors scaled back their appetite for risk, and the shift in market sentiment may drag the exchange lower going into the end of the week as investors maintain a cautious outlook for global growth. Former Bank of England board member David Blanchflower said policy makers should be cautious when withdrawing support from the economy as the recovery “is being driven by stimulus,” and went onto say that central bank around the global should wait for clear evidence of private sector growth before normalizing policy during an interview with Bloomberg Radio. Nevertheless, as the BoE is scheduled to release its policy meeting minutes on July 21, another split in the MPC is likely to stoke increased volatility in the exchange rate as board member Andrew Sentance shifts his focus to the risks for inflation, and the communiqué could spark a rise in interest rate expectations as market participants weigh the prospects for future policy.

The greenback bounced back against most of its major counterparts, while the USD/JPY slipped to a fresh weekly low of 86.97 as the Japanese Yen rallied across the board, and the dollar is likely to face increased volatility going into the North American session as the economic docket is expected to reinforce a weakened outlook for growth and inflation. Consumer prices in the world’s largest economy are expected to fall back to an annualized pace of 1.2% in June from 2.0% in the previous month, which would be the lowest reading since October, while the core CPI is projected to hold steady at 0.9% for the third consecutive month. At the same time, the U. of Michigan consumer confidence survey is forecasted to fall back to 74.0 in July from a two-year high of 76.0 in the month prior, and households may turn increasingly pessimistic over the coming months as they continue to face tightening credit conditions paired with the ongoing deterioration in the labor market.