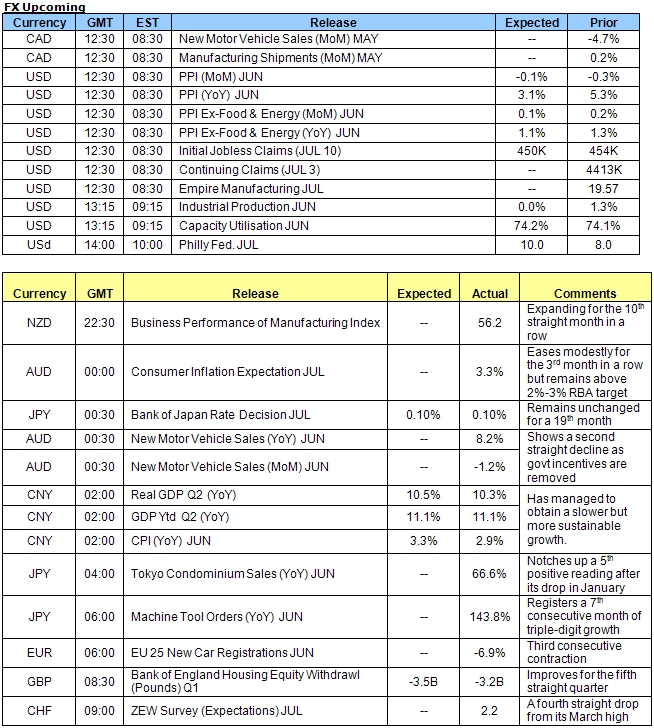 
Meanwhile, the European Central Bank reiterate that the interest rate “appropriate” in its monthly report and expects price growth to remain “moderate” over the medium-term, and went onto say that all the emergency measures taken by the Governing Council is “temporary in nature” as the group aims to a strengthen in financial system.

In addition, the ECB anticipates the economy to expand at a moderate, but uneven pace, and the central bank may look to support the economy going into 2011 as the governments operating under the fixed-exchange rate system tighten fiscal policy and aim to target the budget deficit. At the same time, Governing Council board member Mario Draghi said that the global recovery remains clouded with uncertainties and noted monetary policy remains “highly expansive” during a speech in Rome, and stated commercial banks in Italy have “adequate” capital to pass the stress test as policy makers are scheduled to release the results next week. However, ECB President Jean-Claude Trichet is expected to meet with the commercial banks under review two-days ahead of the outcome, and market speculation stemming from the conference could spark increased volatility in the exchange rate next week as investors weigh the outlook for future policy.

The British Pound surged to a high of 1.5355 during the European session following the shift in market sentiment, and the GBP/USD looks poised to test the 200-Day SMA at 1.5584 over the near-term as investors raise their appetite for risk. Nevertheless, Bank of England board member David Miles held a dovish outlook for future policy and said that the weakness in the European banking system paired with the slack within the real economy poses a risk to the recovery, and talked down speculation for a rate hike during a speech at the Bristol Business Forum in England. At the same time, Chancellor of the Exchequer Gorge Osborne said he does not expect commercial banks in the U.K. to need additional support from the government, although the weakness in the banking system continues to pose a risk to the recovery, and argued that there austerity measures have helped to curb the risks for the economy while testifying in front of policy makers in London. Meanwhile, a report by the BoE showed home equity withdrawals fell GBP 3.2B in the first quarter amid expectations for a GBP 3.5B decline, while the previous reading was revised higher to reflect a GBP 3.4B drop versus an initial projection for a GBP 4.0B decline.

The greenback weakened against most of its major counterparts, with the USD/JPY extending the previous day’s decline to reach a fresh weekly low of 87.85 during the overnight trade, and the reserve-currency may continue to lose ground going into the North American session as equity futures foreshadow a higher open for the U.S. market. Meanwhile, the economic docket is expected to show producer prices in the world’s largest economy contract 0.1% in June following the 0.3% drop in the previous month, while the annual rate is forecasted to expand 3.1% from the previous year, which would be the slowest pace of growth since November. Moreover, industrial outputs are projected to fall 0.1% during the same period after surging 1.2% in May, while the Senate Banking Committee is scheduled to hold a hearing on the nomination for Janet Yellen, Sarah Bloom Raskin, and Peter Diamond to the Federal Reserve Board of Governors at 13:00 GMT.