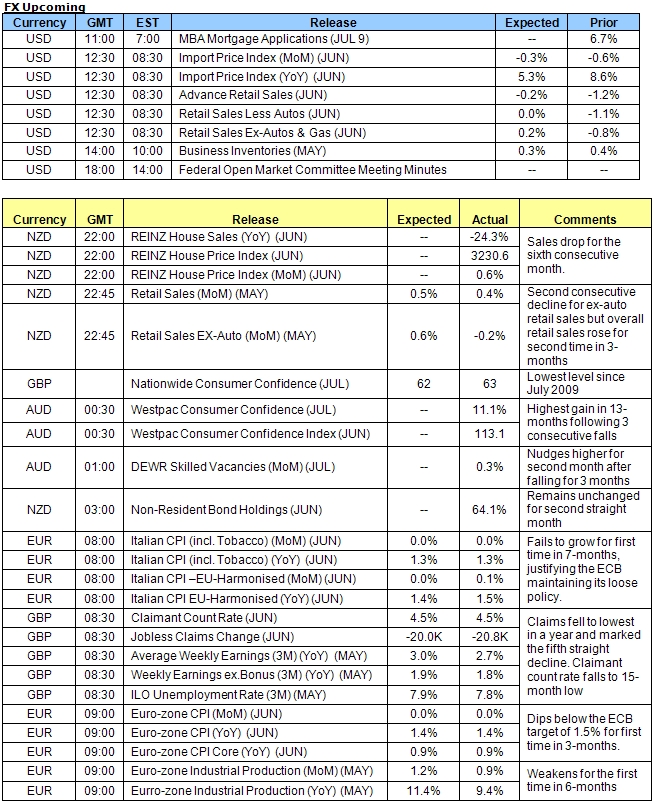 
Bank of England board member Andrew Sentance said economic conditions are “a lot better than where they were a year ago” according to an interview with the Reading Post, and argued that the MPC should “start a process” of gradually lifting the benchmark interest off the record-low as “inflation hasn’t turned out to be as low as expected.”

As Mr. Sentance shifts his focus to the stickiness in price growth and looks to curb the risks for inflation, we are likely to see him dissent against the majority for the second-month and push for a 25bp rate hike in the BoE meeting minutes, which are due out on July 21, and the central bank may turn increasingly hawkish going forward as price growth holds above the 3% target for the fifth time this year. Nevertheless, the economic docket showed claims for unemployment benefits in the U.K. slipped 20.8K in June after contracting a revised 31.1K in the previous month, with the claimant count rate falling back to 4.5% from 4.6%, which was largely in-line with forecasts, while the gauge for unemployment utilizing the International Labor Organization’s system unexpectedly weakened to 7.8% during the three-months through May to mark the lowest reading since January. However, average weekly earnings including bonuses fell back to 2.7% during the same period from a revised 4.1% in March, and the drop in personal incomes reinforces a dour outlook for private spending as households continue to face tightening credit conditions paired with the ongoing weakness in the labor market. As a result, the BoE may hold a dovish outlook for monetary policy and look to support the real economy over the coming months as the new coalition in the U.K. plans to withdraw fiscal support and reduce the budget deficit.

The Euro held a narrow range through the overnight trade, with the exchange rate floating around the 1.2700 level, and the single-currency may continue to trend sideways going into the U.S. session as investors weigh the outlook for future policy. Consumer prices in the Euro-Zone held flat in June, with the annualized rate falling back to 1.4% from 1.6% in May, while the core rate of inflation bounced back to 0.9% from 0.8% in the previous month. At the same time, industrial outputs in the euro-region increased 0.9% in May, which fell short of expectations for a 1.2% rise, while production rose 9.4% from the previous year versus forecasts for an 11.4% expansion. As price growth remains subdued, with the economy struggling to brush off the recession, the European Central Bank is widely expected to maintain a loose policy stance and support the region going forward as the governments operating under the fixed-exchange rate system plan to tighten fiscal policy and balance their public finances.

The greenback bounced back against most of its major counterparts, while the USD/JPY slipped to a low of 88.50 following a shift in market sentiment, but equity futures are foreshadowing a higher open for the U.S. market, which could lead to a reversal in the major currencies. However, the economic docket is expected to show retail spending in the U.S. contract 0.3% in June after unexpectedly falling 1.2% in the previous month and the drop in household spending could weigh on the outlook for future growth and feed the rise in risk aversion. At the same time, import prices in the world’s largest economy are projected to fall 0.4% during the same period after weakening 0.6%, while the Fed is likely to hold a dovish outlook for future policy in its policy meeting minutes, which is scheduled to cross the wires at 18:00 GMT.