Moody’s said that “the Portuguese government’s financial strength will continue to weaken over the medium-term” as it struggles to manage its public finances, and went onto say “growth prospects are likely to remain relatively weak unless recent structural reforms bear fruit over the medium-to-longer term.”

At the same time, the European Union added Bulgaria, Cyprus, Denmark and Finland to its watch list and warned the member states to lower their budget deficits to stay in-line with the stability pact, while Olli Rehn, the European Commissioner for Economic and Monetary Affairs said that the banking system in the region is “resilient” as the group prepares to release the results of the stress test next week. Meanwhile, European Central Bank President Jean-Claude Trichet reiterated that monetary policy remains “appropriate” during an interview with a French newspaper, and stated global investors should not “underestimate Europe’s ability to take bold decisions” as the governments operating under the fixed-exchange rate system come together to tackle the debt crisis. Nevertheless, the economic docket showed investor confidence in Germany fell to the lowest level since April 2009, with the ZEW survey tumbling to 21.2 in July from 28.7 in the previous month, while the gauge for the Euro-Zone slipped to 10.7 from 18.8 in June. Moreover, wholesale prices in Europe’s largest economy unexpectedly weakened 0.2% in June, with the annualized rate falling back to 5.1% from 6.2% in the month prior, and subdued price growth will certainly give the ECB scope to maintain a loose policy stance throughout the second-half of the year as it aims to balance the risks for the region.

The British Pound halted the three-day decline and rallied to a high of 1.5116 during the overnight trade following an unexpected rise in price growth, and the rebound in inflation could lead the Bank of England to begin normalizing monetary policy in the second-half of the year as it maintains its dual mandate to ensure price stability while promoting full-employment. Consumer prices in the U.K. increased 0.1% in June amid forecasts for a flat rating, with the core rate of inflation advancing to an annualized pace of 3.1% from 2.9% in the previous month to match the highest reading since comparable records began in 1997, while the headline reading for inflation pulled back to 3.2% from 3.4% in May. At the same time, a report by the Department for Communities and Local Government showed home prices in the U.K. expanded at an annual pace of 11.0% in May to mark the highest reading since October 2007, and the rebound in the housing market may gather pace over the coming months as the region continues to emerge from the worst recession since the post-war period.  As inflation holds above the 3% limit for the fifth time this year, the resilience in price growth is likely to lead to a split in the BoE as board member Andrew Sentance looks to increase the benchmark interest rate, and the MPC may look to switch gears over the coming months in order to mitigate the risks for inflation.

U.S. dollar price action was mixed during the overnight trade, with the USD/JPY extending the previous day’s decline to reach a low of 88.18, and we may not get a clear directional bias going into the North American session as the U.S. 2Q earnings season kicks off. Nevertheless, the trade deficit for the world’s largest economy is expected to narrow to $39.0B in May from $40.3B as global trade conditions improve, while the monthly budget statement is projected to show a $69.4B deficit in June following the $94.3B shortfall during the previous month. 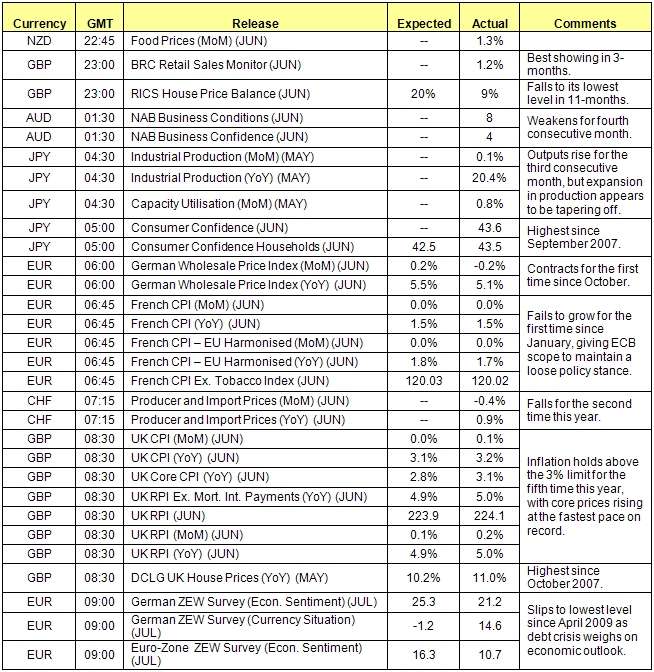