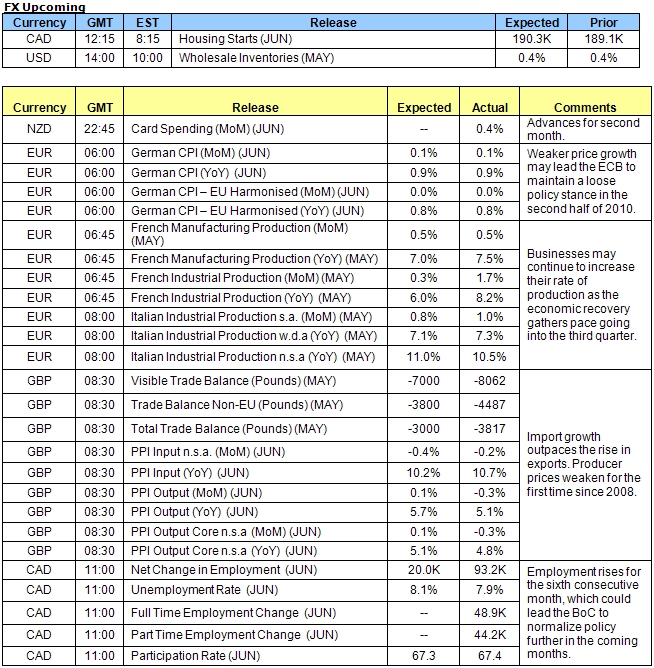 
However, the overnight advance appears to tapering as the U.S. dollar rallies against most of the major counterparts and we could see the rebound in the greenback may carry into the North American trade, but the reserve currency could face choppy price action throughout the day as market liquidity thins ahead of the weekend.

The Bank of England is scheduled to release its policy meeting minutes on July 21 and the central bank is likely to maintain a dovish outlook for future policy as the ongoing weakness in the private sector weighs on the outlook for future growth. At the same time, MPC board member Andrew Sentance may continue to dissent against the majority and push for a 25bp rate hike like we’ve seen in the previous month, and a split in the BoE could support the rebound from the June low (1.4346) as investors speculate the central bank to normalize policy in the second-half of the year. Nevertheless, the economic docket for the U.K. showed producer output prices slipped 0.3% in June versus expectations for a 0.1% rise, while the annualized rate fell back to 5.1% from a revised 5.5% in the previous month. At the same time, input prices fell 0.2% amid expectations for a 0.4% decline, while the core rate grew at an annualized pace of 4.8% from 4.4% in May to mark the highest reading since December 2008.  In addition, the visible trade deficit unexpectedly widened to 8.062B from a revised 7.411B in April, which is the largest shortfall since January as imports outpaced the growth in foreign demands.

The Euro halted the three-day rally and slipped to a low of 1.2261 during the overnight trade as policy makers in the region held a cautious outlook for the economy, and the ongoing turmoil in the financial system could weigh on future growth as governments operating under the fixed-change rate system plan to cut back on public spending and tighten fiscal policy. European Central Bank President Jean-Claude Trichet reiterated that inflation expectations remain “well anchored” and pledged to take the necessary steps to deliver price stability, but went onto say that it remains too early to say that the crisis is over while speaking at a conference in Frankfurt. Moreover, the central bank head said that the results of the bank stress tests will be announced individually and argued that “fundamental changes” will need to be implemented to strengthen the financial system, and noted that “a more stringent implementation of rules and procedures to check and correct excessive deficits and debts will be essential” as the region struggles to manage its public finances. As a result, the Governing Council is likely to support the economy throughout the second-half of the year as it aims to encourage a sustainable recovery, but the results of the bank stress test could lead the ECB to loosen monetary policy further as the debt crisis continues to weigh on the financial system.

The greenback appreciated against most of the major currencies overnight, with the USD/JPY extending the two-day rally to reach a fresh weekly high of 88.69, and the dollar may push higher throughout the day as equity futures foreshadow a lower open for the U.S. market. Nevertheless, there is one piece of data that we will be looking out for, and a second consecutive 0.4% rise in wholesale inventories could boost the outlook for future growth as private sector consumption remains one of the leading drivers of growth.

Euro Confirms Reversal vs US Dollar, Targets Above 1.32