As the governments operating under the single-currency aim to balance their public finances and cut back on public spending, tightening fiscal policy is likely to lead the Governing Council to support the real economy over the coming months as the central bank head expects to see subdued price growth paired with an uneven recovery.

At the same time, Mr. Trichet may refrain from commenting on the European bank stress test as the results are expected to be released on July 23, but the central bank head is anticipated to meet with the commercial banks under review two-days ahead of the release, which could spur speculation about the results ahead of the release. Nevertheless, the trade surplus for Germany narrowed EUR 9.7B in May from a revised EUR 13.1B in the previous month as the growth in imports outpace the advance in exports, while the current account surplus slipped to EUR 2.2B from a revised 11.3B April. At the same time, industrial outputs in Europe’s largest economy jumped 2.6%, which well exceeded forecasts for a 0.9% rise, while production increase at an annualized pace of 12.4%from the previous year after expanding a revised 13.9% in April.

The British Pound fell back from the high (1.5240) and slipped to a low of 1.5122 ahead of the Bank of England rate decision as the International Monetary Fund lowered its growth forecast for the U.K., and the risks for a protracted recovery may lead the central bank to maintain a loose policy stance over the coming months as it aims to balance the risks for the region. The IMF expects Britain to expand 1.2% this year versus an initial forecast for a 1.3% expansion in the growth rate as Prime Minister David Cameron plans to tighten fiscal policy and cut public spending, while the group sees GDP increasing 2.1% amid projections for a 2.5% rise. Nevertheless, the BoE held the benchmark interest rate at 0.50% this month and maintained its asset purchase program at GBP 200B, but refrained from releasing a policy statement, which produced muted price action in the British Pound cross rates. As a result, the policy meeting minutes due out on July 21 is likely to spark increased volatility in the exchange rate as investors weigh the prospects for future policy, and board member Andrew Sentance may continue to dissent against the majority as inflation holds above the 3% limit for the third time this year. Meanwhile, the economic docket showed industrial outputs in the U.K. increased 0.7% in May to top expectations for a 0.4%, with manufacturing expanding 0.3% during the same period, and businesses may continue to raise their rate of production over the coming months as global trade conditions improve.

U.S. dollar price action was mixed during the overnight trade, with the USD/JPY extending yesterday’s rally to reach a fresh weekly high of 88.45 as the Japanese Yen weakened across the board, and the greenback could face increased volatility throughout the U.S. trade as the economic docket is expected to reinforce a weakened outlook for the world’s largest economy. Even though we’re expecting to see a pullback in initial and continuing jobless claims, consumer credit in the U.S. is forecasted to contract $2.3B in May after unexpectedly advancing $1.0B in the previous month, and the ongoing weakness in the private sector could lead the Federal Reserve to support the real economy throughout the second-half of the year as households face tightening lending standards paired with the deterioration in the labor market. 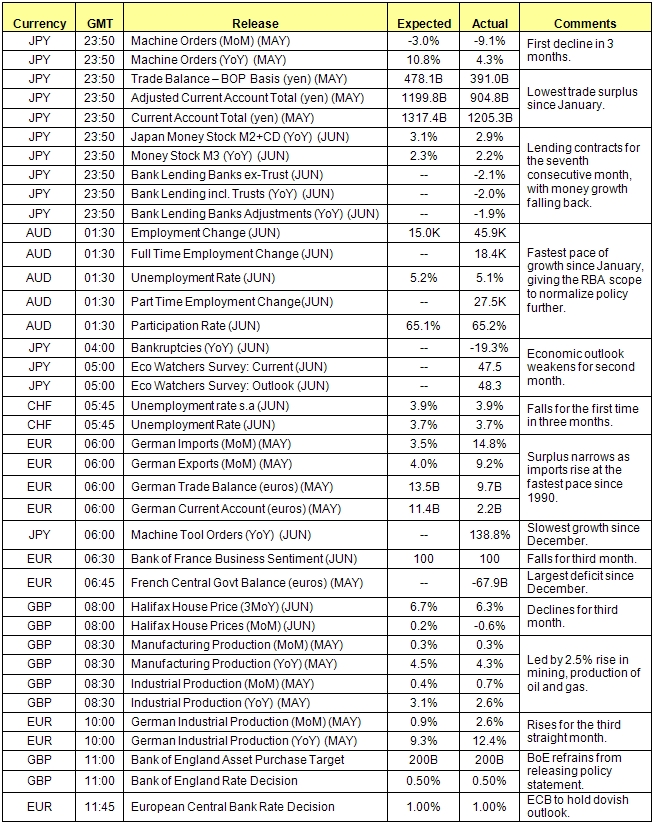