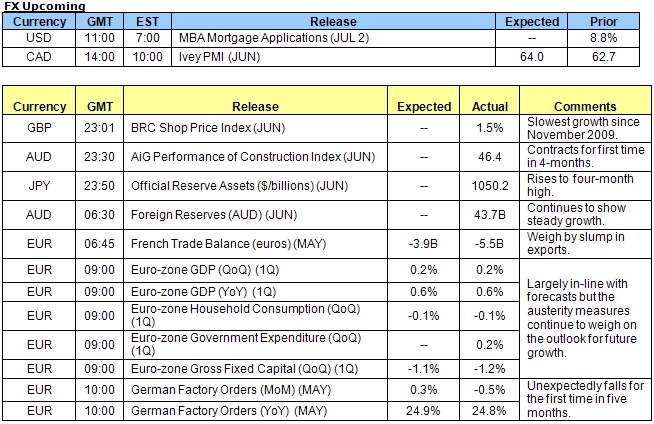 
A report by Germany’s Economy Ministry showed factory orders unexpectedly slumped 0.5% in April to mark the first decline in five-months, led by a 2.3% in demands for intermediate goods, while the annualize fell back to 24.8% from a revised 30.1% in the previous month.

At the same time, the final 1Q GDP report showed economic activity expanded 0.2% during the first three-months of 2010, with the annualized reading increasing 0.6% from the previous year, which was largely in-line with expectations, but the austerity measures are likely to weigh on future growth as the governments operating under the fixed-exchange rate system plan to tighten fiscal policy and scale back public spending. As a result, the European Central Bank is widely expected to maintain its current policy and hold the benchmark interest rate at 1.00% at its policy meeting tomorrow, and President Jean-Claude Trichet is likely to maintain a dovish outlook for future policy as he expects to see an uneven recovery paired with subdued price growth. However, a shift in the central bank’s economic assessment is likely to spark increased volatility in the exchange rate as investors weigh the prospects for a sustainable recovery,

The overnight decline in the British Pound appears to have stalled ahead of the 100-Day SMA at 1.4997 as price action bounces back from a low of 1.5081 to maintain the short-term rally from the June low (1.4346), and the exchange rate may continue to trend higher over the near-term as the new government in the U.K. pledges to cut the budget deficit. Meanwhile, a report by the British Retail Consortium showed shop prices in the U.K. grew at an annualized pace of 1.5% in June to mark the slowest pace of growth since November 2009, with prices contracting 0.1% from the previous month, and softening price pressures will certainly allow the Bank of England to maintain a neutral policy stance over the coming months as Governor Mervyn King expects inflation to fall back towards the 2% target. Nevertheless, the BoE is anticipated to hold its key rate at 0.50% and maintain its asset purchase target at GBP 200B in an effort to encourage a sustainable recovery, and the MPC may look to support the economy in the second-half of the year as households continue to face tightening credit conditions paired with the deterioration in the labor market.

The greenback bounced back against most of its major counterparts, while the Japanese Yen rallied across the board, which pushed the USD/JPY to a low of 87.01, and risk trends are likely to drive price action going into the North American session as the economic docket remains fairly light. Equity futures foreshadow a lower open for the U.S. market following the decline in the Asian and European benchmark indices, and the U.S. dollar may continue to appreciate throughout it day as it benefits from safe-haven flows.