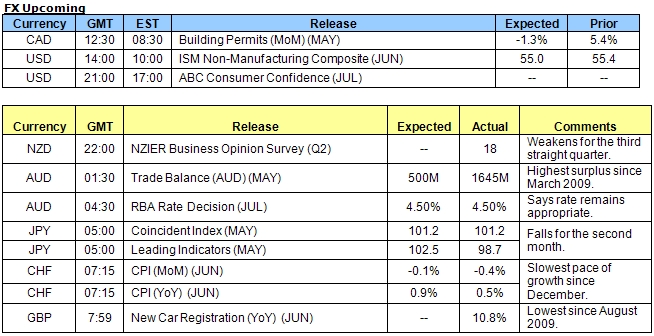 
Meanwhile, European Central Bank President Jean Claude Trichet is scheduled to meet with the big banks on July 21 to discuss the results of the stress test according to an article from Reuters, and will evaluate whether some of the commercial lenders will need to recapitalize their balance sheets as the banking system remains weak.

At the same time, ECB board member Christian Noyer said that he expects commercial banks in France to pass the stress test while speaking in Paris, and went onto say plans to raise capital requirements should “not impeded the recovery” and must not “contradict” macroeconomic objectives set out by policy makers as the global financial system remains fragile. In addition, Spain’s Finance Minister, Elena Salgado, announced that its stress test will cover more than 95% of the financial system while speaking in front of parliament, and pledged to release the results of all the banks as policy makers aim to increase transparency. As the European debt crisis continues to weigh on the economic recovery, the outcome of the bank stress test will certainly have a large impact on dictating future price action for the single-currency, and any signs of further weakness in the financial system could lead the Governing Council to halt its exit strategy as it aims to balance the risks for the region.

The British Pound maintained the rally from the June low (1.4346) and rallied to a high of 1.5206 during the European trade, and the GBP/USD may continue to push higher over the near-term as the austerity measures taken on by the new government reinforces an improved outlook for long-term growth. However, as the drop in public spending weighs on economic recovery, market participants speculate the Bank of England to support the real economy throughout the second-half of the year, and the MPC may hold a loose policy stance going into 2011 as the private sector remains weak. However, the MPC may fail to meet on common ground as the stickiness in price growth becomes an increased concern, and we may see board member Andrew Sentance continue to dissent against the majority and push for a rate hike going forward. Nevertheless, the BoE is widely expected to hold the benchmark interest rate at 0.50% later this week and maintain its asset purchase target at GBP 200B as the rebound in economic activity tapers off, and the central bank may refrain from releasing a policy statement like we’ve seen during the previous month as its scheduled to release the meeting minutes on July 21.

The greenback lost ground against most of its major counterparts, while the USD/JPY advanced to a high of 89.97 as the Japanese Yen weakened across the board, and the rise in risk appetite may continue to drive price action throughout the day as market sentiment continues to dictate price action in the foreign exchange market. However, as service-based activity in the world’s largest economy is expected to expand at a slower pace, with economists forecasting the ISM non-manufacturing index to fall back to 55.0 in June from 55.4 in the previous month, the data could drag on risk appetite as investors weigh the prospects for global growth.