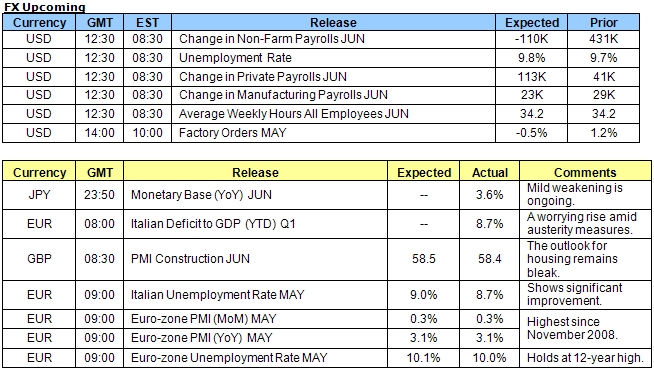 
Meanwhile, German central bank President Axel Weber encouraged commercial banks to come up with a contingency plan should they fail the bank stress test, and said that results could force some lenders to recapitalize according to an article in the Financial Times.

At the same time, the economic docket showed the annual rate of unemployment in the Euro-Zone held at 10.0% for the third consecutive month in May following a downward revision in the previous month’s reading, which is the highest level since August 1998, and the ongoing weakness in the real economy may lead the European Central Bank to maintain a loose policy stance going forward as the governments operating under the single-currency plan to scale back on public spending and reduce the budget deficit. At the same time, producer prices in the euro-region advanced 0.3% during the same period after expanding a revised 1.0% in April, while the annualized rate increased 3.1% from the previous year to mark the fastest pace of growth since November 2008. However, businesses may become increasingly reluctant to pass on higher costs to consumers as households continue to face the deterioration in the labor market paired with tightening credit conditions, subdued growth in consumer prices would certainly give the ECB scope to support the economy throughout the second-half of the year as they maintain their one and only mandate to ensure price stability.

The British Pound extended the previous day’s advance and rose to a fresh weekly high of 1.5213 during the European session, and the short- term rally could lead the GBP/USD to retrace the sell-off from the April highs as the economic outlook for the U.K. improves. Moody’s Investor Services said “the U.K.’s debt affordability would remain consistent with an AAA rating” should the new government successfully implement its austerity measures, but went onto say that the budget-cutting initiatives could have a negative impact on the recovery as the private sector remains weak. Meanwhile, construction in Britain expanded at a slightly slower pace in June, with the PMI reading falling back to 58.4 from 58.5 in May, and fears of a protracted recovery paired with the cut in government spending could lead the BoE to support the economy over the coming months.

U.S. dollar price action was mixed during the overnight trade, with the USD/JPY rallying to a high of 88.20, and the greenback could face increased volatility going into the North American session as employment in the world’s largest economy is expected to contract for the first time in six-months. U.S. non-farm payrolls are forecasted to fall -130K in June, while the annual rate of unemployment is projected to rise to 9.8% from 9.7% in May, and the data could spark increased volatility in the major exchange rates as investors weigh the outlook for future growth. At the same time, average hourly earnings are anticipated to rise 0.1% during the same period after expanding 0.3% in the previous month, while factory orders are expected to fall 0.5% in May after increasing 1.2% in the month prior.