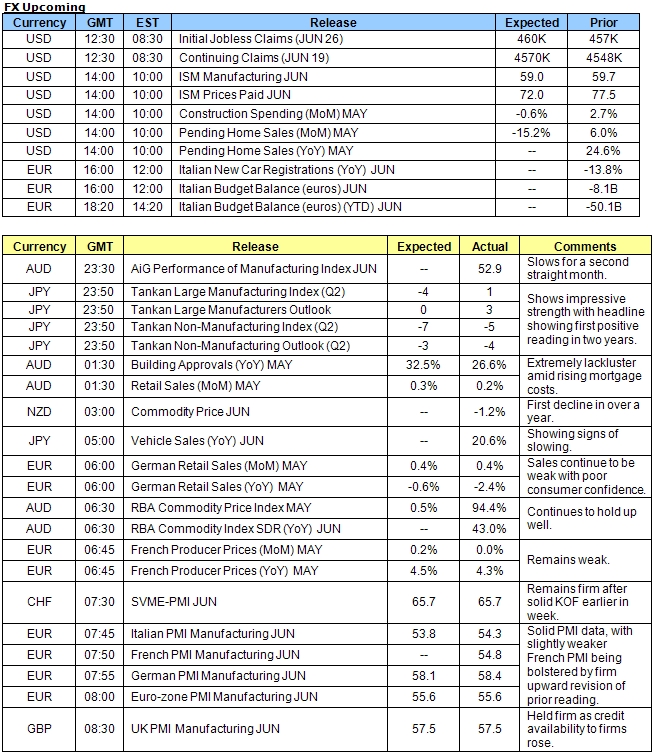 
However, as the austerity measures weighs on the outlook for future growth, the Governing Council may look to maintain a loose policy stance and support the economy throughout the second-half of 2010 as the governments operating under the fixed-exchange rate system struggle to manage their public finances.

Meanwhile, Bundesbank Vice-President Franz-Christoph Zeitler said that the results of the European bank stress test will help to boost “confidence through transparency” as the financial system remains fragile, but went onto say that the outlook remains clouded by “enormous” uncertainties during a speech in Frankfurt. At the same time, Spain successfully auctioned EUR 3.5Bof five-year government bonds just after Moody’s announced that it has put the nation’s AAA credit rating under review, with the notes yielding 3.657% compared to the 3.532% that was offered at the sale on May 6. Nevertheless, the economic docket showed retail spending in Germany increase 0.4% in May, which was largely in-line with expectations, while consumption tumbled at an annualized pace of 2.4% from the previous year versus expectations for a 0.6% decline. Moreover, the final PMI reading for Europe’s largest economy showed manufacturing expanded at a faster pace than initially expected, with the index holding steady at 58.4 for the second consecutive month in June, while the gauge for the Euro-Zone was unchanged at 55.6 from 55.8 in the previous month.

The British Pound bounced back during the European trade, with the GBP/USD rallying to a high of 1.4977 ahead of the U.S. trade, but the cautious outlook held by U.K. policy makers may continue to drag on the exchange rate as investors weigh the prospects for future policy. Bank of England board member David Miles said he expects to see “reasonable growth” this year and that that the recovery may gather pace over the coming months during an interview with the Daily Mail, but went onto say that the current situation does not call for tightening monetary policy as the global financial system remains frail. Meanwhile, the BoE said mortgage demands unexpectedly declined in the second-quarter and that the ongoing weakness in the private sector may constrain the availability of credit growing forward, and warned “the availability of secured credit was expected to decrease in the next three months” as households and businesses continue to face tightening lending standards. Meanwhile, manufacturing in the U.K. weakened for the first time in four months, with the PMI reading falling back to 57.5 in June from 58.0 in the previous month, and the recent developments could lead the BoE to maintain a loose policy stance in the second-half of the year as it aims to balance the risks for the economy.

The greenback weakened across the board, with the USD/JPY extending the decline from earlier this week to break below 88.00 for the first time since December, and the reserve currency could face increased volatility going into the North American trade as the economic docket is expected to reinforce a dour outlook for future growth. The ISM manufacturing index is expected to fall back to 59.0 in June from 59.7 in the previous month as businesses scale back their rate of production, while pending home sale in the world’s largest economy is forecasted to contract 14.2% in May, which would mark the biggest decline in nearly a decade. At the same time, construction spending is projected to weaken 0.8% during the same period after expanding 2.7% in April, and the ongoing weakness in the private sector could damped the prospects for future policy as the Fed pledges to keep the interest rate close to zero for an “extended period” of time.