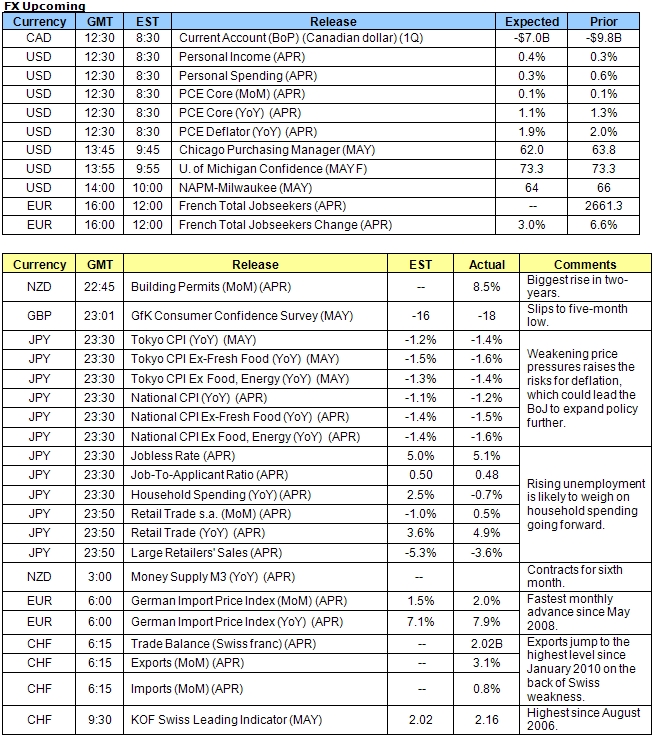 
Meanwhile, European Central Bank board member Lorenzo Bini Smaghi said that “default is not a viable solution” for the euro-region during a speech in Morocco, and went onto say that the “financial markets are testing each country, one by one, to see whether they are willing to adopt the necessary budgetary measures, starting with those which seem to be facing the greatest hurdles to consolidation.”

At the same time, Governing Council member Michael Bonello highlighted the importance of strengthening the EU Stability and Growth Pact while speaking in front on the Committee on Economic Affairs and Development of the Parliamentary Assembly of the Council of Europe as the economies operating under the fixed-exchange rate system struggle to manage their public finances, and said “benign neglect of accumulating imbalances, especially in the context of a monetary union , will have serious economic and social repercussions, sooner rather than later.” As European policy makers take unprecedented steps to mitigate the risks for contagion and maintain a cautious outlook for the region, market participants expect the ECB to support the economy throughout the second-half of the year as the central bank aims to balance the risks for the region. However, the economic docket showed import prices in Germany jumped 2.0% in April to top forecasts for a 1.5% rise, while price growth increased 7.9% from the previous year to mark the highest reading since August 2008, and rising price pressures would make it difficult for the Governing Council to maintain a loose policy as they maintain their one and only mandate to ensure price stability.

The British Pound failed to cross above the 20-Day SMA (1.4667) on Friday and pulled back from the high (1.4609) to maintain the narrow range from earlier this week, and the currency may continue to trend sideways over the near-term as investors weigh the prospects for future policy. As Prime Minister David Cameron and the new coalition in the U.K. aim cut the budget deficit and balance public finances, tightening fiscal policy could lead the Bank of England to support the economy in the second-half of the year even as the OECD says the central bank should scale back its asset purchases and raise interest rates by no later than the fourth-quarter of 2010. Meanwhile, consumer confidence in the U.K. unexpectedly slipped to a five-month low in May, with the GfK index falling back to -18 from -16 in April, and households may turn increasingly pessimistic towards the economy as the new government plans to increase taxes and cut public spending.

U.S. dollar price action was mixed overnight, with the USD/JPY extending yesterday’s advance to reach a fresh weekly high of 91.40, and we may see range-bound price action in the major exchange rates during the North American session as traders in the world’s largest economy go offline ahead of the Memorial Holiday weekend. Nevertheless, the economic docket is expected to show personal spending increase for the sixth consecutive month in April, while household incomes are forecasted to expand 0.4% after climbing 0.3% in March, and the rise in private sector consumption could stoke increased volatility in the currency market as it remains one of the leading drivers of growth. However, the Chicago purchasing managers index is projected to fall back to 61.0 in May after advancing to a five-year high of 63.8 during the previous month, while the NAPM-Milwaukee index for manufacturing is anticipated to slip to 64.0 from 66.0 in the previous month, and the drop in factory production could drag on the exchange rate as investors weigh the prospects for a sustainable recovery.

Equities and AUDUSD on Paths Seen Before