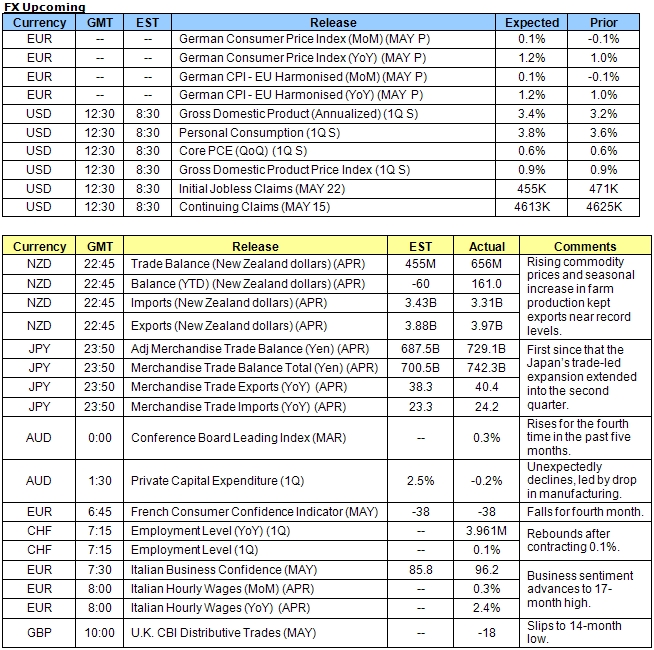 
Meanwhile, the International Monetary Fund said that Italy must address the “high public debt” as the group expects to see the economy enter a “gradual recovery” this year, but went onto say that the nation’s banking sector faces “a number of challenges over the medium term” as the nation struggles to emerge from the recession.

At the same time, Bundesbank President Axel Weber said that “it is too early to announce the end of the financial crisis” as policy makers continue to take unprecedented steps to support the economies operating under the single-currency, and argued that “the introduction of restructuring and dissolving mechanisms is an indispensible part of reform efforts to quickly clean up or wind down systemically relevant banks threatened by insolvency” during a speech in Frankfurt. Meanwhile, European Central Bank board member Ewald Nowotny said that the Governing Council is not engaging in quantitative easing and that the decision to launch its bond purchase program has “not changed” the central banks stance for monetary policy, and went onto say that the timeframe for the emergency program “depends on market developments” while speaking in Vienna. As policy makers in the Euro-Zone maintain a cautious outlook for the region, the ECB is likely to stay dovish going into the second-half of t he year, and could be forced to maintain a loose policy stance throughout 2010 as the Governing Council aims to balance the risks for region.

The British Pound pared the sell-off from earlier this week and advanced to 1.4584 to maintain the narrow range from mid-May, but rise in risk appetite could lead to a breakout in the GBP/USD as the pair appears to be carving a near-term bottom ahead of 1.4200. Meanwhile, Prime Minister David Cameron said that the ballooning deficit is an “existential threat” to the economy during an interview with BBC Radio, and said that cutting the budget shortfall is “good for the economy” as the new coalition looks to cut GBP 6B in government spending this year. As the government pledges to tighten fiscal policy, the drop in public consumption is likely to put additional pressures on the Bank of England to support the economy going forward, and Governor Mervyn King may keep a loose policy stance in the second-half of the year as the central bank works to encourage a sustainable recovery. Nevertheless, a report by the Confederation of British Industry showed retail sales unexpectedly slipped to a 14-month low in May as the index slipped to -18 from 13 in the previous month, and the ongoing slack within the economy could lead the BoE to remain dovish over the coming months as policy makers see a risk for a protracted recovery.

The greenback lost ground against most of its major counterparts following the shift in risk sentiment, while the USD/JPY rallied to a high of 90.54 as the Japanese Yen weakened across the board, and the dollar is likely to face increased volatility during the North American trade as the economic docket is expected to reinforce an improved outlook for the world’s largest economy. The preliminary 1Q GDP report is expected to show economic activity expanding 3.4% amid in initial forecasts for a 3.2% rise in the growth rate, while personal consumption, which accounts for more than two-thirds of the economy, is projected to increase 3.8%, which would be the fastest pace of growth since the fourth-quarter of 2006.