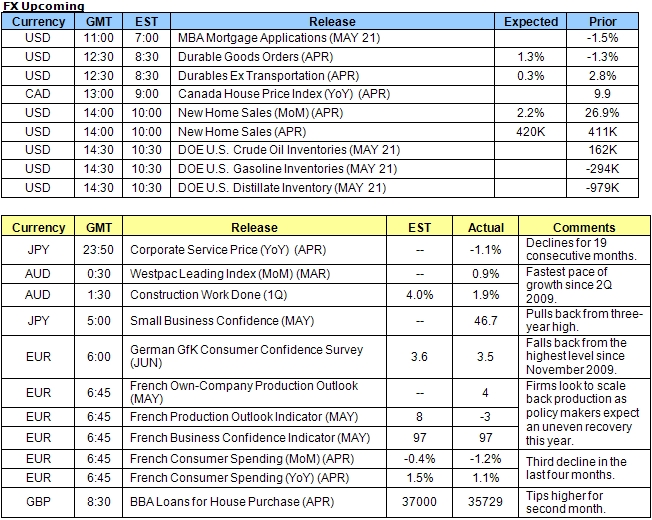 Meanwhile, the Organization for Economic Cooperation and Development held an improved outlook for the world economy and raised its outlook for future growth as emerging economies continue to drive the global recovery, and expects its group of 30 nations to grow 2.7% this year amid an initial forecast for a 1.9% expansion back in November.

Moreover, the OECD said that U.K. policy makers “face the challenge of preserving credibility, with headline inflation and some measures of inflation expectations exceeding the targeted rate,” and argued that the rise in inflation expectations “implies a need to increase interest rates earlier than previously thought and no later than the last quarter of 2010.” In addition, the group said that the central bank should look to normalize policy throughout the second-half of the year and scale back its emergency programs, and went onto say that “the fragile state of the economy should be weighed against the need to maintain credibility when deciding the initial pace of consolidation” as tightening fiscal policy “will be a drag on activity from 2010 onwards.” As the new government aims to balance its finances, the drop in public spending could put pressures on the BoE to maintain a dovish policy stance throughout the year, and the central bank may look to support the economy as the fiscal stimulus tapers off in order to encourage a sustainable recovery. Nevertheless, a report by the British Bankers’ Association showed mortgage approvals increased to 35,729 in April from a revised 35,044 in the previous month, which failed to meet expectations for a rise to 37,000, and the ongoing weakness in the private sector reinforces a dovish outlook for future policy as Governor Mervyn King expects the slack within the real economy to drag on inflation going forward.

The Euro weakened for the third-day and slipped a low of 1.2263 as the uncertainties surrounding the debt crisis continued to weigh on market sentiment, and fears of contagion drag on the exchange rate over the near-term as global policy makers take extraordinary steps to avoid the negative effects from spilling over into other parts of the world. Meanwhile, European Central Bank board member Jose Manuel Gonzalez-Paramo said that the Governing Council’s decision to buy government bonds “are temporary” and “sterilized,” and said that the ECB would not “need to buy huge amounts” of assets to stabilize the financial markets during a speech in Frankfurt. At the same time, council member Erkki Liikanen said that “the decision to launch the Securities Markets Program doesn’t reflect any change in the present monetary policy stance” as he met with the Finnish Chamber of Commerce, and argued that the efforts “will help to resolve a malfunctioning of some segments of the euro-area debt-securities market” as policy makers continue to support the real economy. Nevertheless, the GfK consumer confidence survey for Germany slipped to 3.5 in June from a revised 3.7 in the previous month, and fears of a protracted recovery may weigh on household sentiment over the medium-term as policy makers maintain a cautious outlook for the region.

The greenback lost ground against most of its currency counterparts as the rebound in risk appetite swayed demands for the reserve-currency, while the USD/JPY pared the previous day’s decline to reach a high of 90.48 during the overnight session. However, the dollar could face increased volatility going into the U.S. trade as the economic docket is expected to reinforce an improved outlook for the world’s largest economy. Demands for durable goods are forecasted to increase 1.3% in April after contracting 1.3% in the previous month, while orders excluding transports are projected to increase 0.5% following the 2.8% expansion in March. In addition, new home sales are expected to rise 3.4% to an annualized pace of 425K in April, which would be the fastest pace of growth since September 2008, and conditions are likely to improve going forward as the recovery gathers pace.