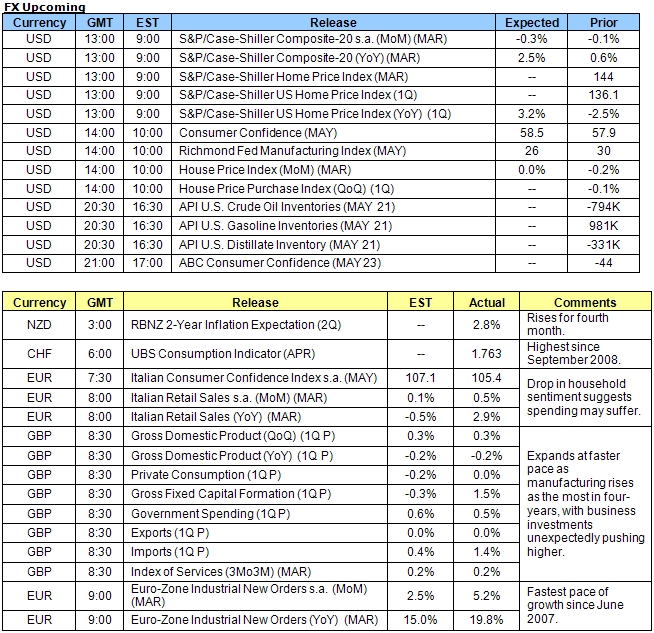 
Meanwhile, European Central Bank board member Ewald Nowotny said that the Governing Council is not “engaging in any form of quantitative easing” during a conference in Brussels, and went onto say that the central bank’s approach for monetary policy remains “appropriate” as the ECB aims to balance the risks for the economies operating under the fixed-exchange rate system.

As the International Monetary Fund sees Spain’s banking industry “under pressure” and argues that the debt-cutting measures have been “too slow,” fears of contagion could certainly lead the Governing Council to maintain a loose policy stance throughout the second-half of 2010, and the single-currency is likely to remain weak over the near-term as investors scale back their appetite for risk. Meanwhile, the EUR/JPY slipped to 108.85 overnight, which is the lowest level since November 2001, and the rise in risk aversion could drag the pair lower throughout the week as investor sentiment falters. Nevertheless, the economic docket showed industrial new orders in the Euro-Zone jumped 5.2% in March after expanding 1.9% in the previous month to mark the biggest advance since June 2007, while demands increased 19.8% from the previous year, which exceeded expectations for a 15.0% rise.

The British Pound bounced back from a low of 1.4260 during the European trade to maintain the narrow range from the previous week, and the exchange rate may continue to trend sideways over the near-term as investors weigh the prospects for future policy. Meanwhile, the preliminary 1Q GDP report showed economic activity expanded 0.3% from the last three-months of 2009 as manufacturing increases at the fastest pace in four years, which was largely in-line with expectations. The breakdown of the report showed private consumption held flat during the first three-months of the year amid forecasts for a 0.2% decline, while gross fixed capital formations unexpectedly jumped 1.5% after contracting 2.7% in the fourth quarter, and conditions are likely to improve going forward as the economic recovery gathers pace. However, as Bank of England Governor sees increased downside risks for growth and expects the ongoing slack within the real economy to weigh on inflation, the central bank is likely to maintain a dovish policy stance going into the second-half of the year as the MPC aims to encourage a sustainable recovery.

The greenback continued to gain ground against most of its major counterparts, while the Japanese Yen rallied across the board, which pushed the USD/JPY to a low of 89.31 on Tuesday. As market sentiment continues to drive price action in the currency market, the rise in risk aversion is likely to carry into the North American session as equity futures foreshadow a lower open for the U.S. market. Nevertheless, the Confidence Board’s consumer confidence survey is expected to increase to 58.5 in May from 57.9 in the previous month, which would be the highest reading since September 2008, while the house price index is projected to hold flat in March after contracting 0.2% in the month prior. As the economic docket for the world’s largest economy reinforces an improved outlook for future growth, the data could spark a shift in risk sentiment as fears of a protracted recovery diminish.