Nevertheless, the lower house of Germany’s Parliament approved the EUR 750B rescue package in order to support the economies operating under the single-currency, while the upper house is scheduled to vote on the bill later today.

At the same time, the final GDP reading for Europe’s largest economy showed the growth rate expanded 0.2% in the first quarter after unexpectedly holding flat during the last three-months of 2009, led by a rise in government spending paired with an increase in foreign trade, while business investments unexpectedly slipped 1.6% after contracting a revised 1.0% in the fourth-quarter. Moreover, a separate report showed business confidence in Germany unexpectedly weakened in May, with the IFO index slipping to 101.5 from 101.6, while the gauge for future expectations pulled back to 103.7 from a three-year high of 104.0 in April. Meanwhile, service-based activity and manufacturing in the Euro-Zone expanded at a slower pace in May, with the composite purchasing managers index weakening to 56.2 from 57.3, and the ongoing weakness within the private sector may lead the Governing Council to support the economy throughout the second-half of the year as policy makers see a risk for a protracted recovery.

The British Pound pulled back during the European trade and slipped to a low of 1.4317 to maintain the narrow range from earlier this week, and the currency may continue to trend sideways over the near-term as investors weigh the prospects for future policy. A report by the Bank of England showed mortgage approvals by the major banks in the U.K. slipped to a 1-year low of 47K in April from a revised 51K in the previous month, while the M3 money supply unexpectedly held flat after tipping 0.1% higher in March. Nevertheless, business investments unexpectedly jumped 6.0% in the first-quarter to post the largest expansion since the fourth-quarter of 2006, while public sector borrowing increased GBP10.0B in April to mark the biggest shortfall since the series began in 1993, and the ballooning deficit may continue to put pressure on the central bank to maintain a loose policy in the second-half of the year as the government aims to encourage a sustainable recovery in Britain.

The greenback weakened against most of its major counterparts, while the Japanese Yen lost ground across the board, with the USD/JPY advancing to a high of 90.46 following the rise in risk appetite. As the economic docket remains fairly light for the North American trade, risk sentiment is likely to drive price action in the foreign exchange market on Friday, and the dollar could face increased selling pressures as equity futures foreshadow a higher open for the U.S. session.

Do You Expect The Retracement in EUR/USD to Continue Next Week? Join us in the Forum 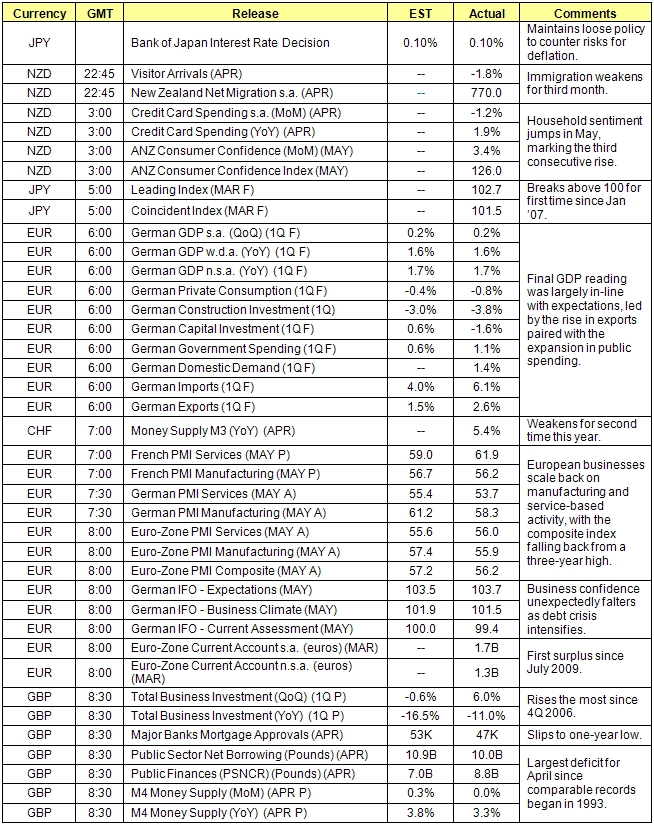