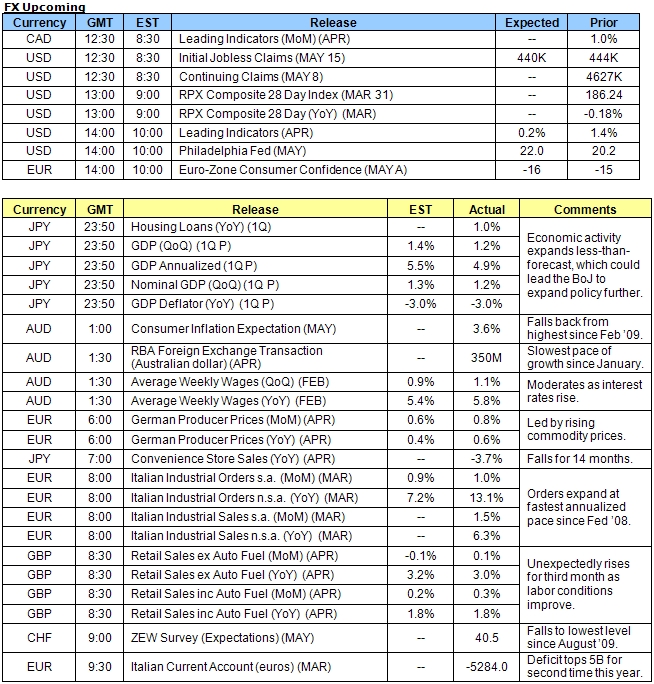 
Meanwhile, European Central Bank board member Jose Manuel Gonzalez-Paramo said Germany failed to notify the Governing Council about the ban on naked short-selling during an interview with an Italian newspaper, but reiterate that the interest rate remains “appropriate” and that the central bank will continue to carry out its exit strategy, though at a slower pace.

At the same time, German Chancellor Angela Merkel said that she is “ready to take necessary actions” to support the euro as the nation’s parliament prepares to vote on the EUR 750B rescue package tomorrow, and argued that market speculation has exacerbated the debt crisis during a speech in Berlin. Nevertheless, the economic docket showed producer prices in Europe’s largest economy expanded 0.8% in April, which topped expectations for a 0.6%, while costs increased 0.6% from the previous year to mark the first rise since February 2009. However, as the ECB expects price pressures to remain subdued over the medium-term and see a risk for a protracted recovery, market participants speculate the Governing Council to maintain a loose policy stance throughout the second-half of the year, which could continue to drag on the exchange rate over the coming months as market participants weigh the prospects for future policy.

The British Pound pared the previous day’s advance and slipped to a low of 1.4320 during the overnight session as investors scaled back their appetite for risk, and the currency may hold a narrow range going into the end of the week as the coalition in the U.K. plans to implement new measures to balance the risks for the economy. Chancellor of the Exchequer George Osborne pledged to overhaul financial regulation and said “the central principle of reform is there” as the government discusses new measures, while Bank of England board member Adam Posen said policy makers should consider breaking up the large banks during a speech in Berlin as the government needs to achieve a “better structure” for the financial markets. Meanwhile, retail spending in  the U.K. expectedly expanded for the third consecutive month in April, with sales increased 0.1% after rising a revised 0.4% in the previous month, and conditions are likely to improve over the coming months as the rebound in economic activity gathers steam.

The U.S. dollar rallied against its higher-yielding counterparts following the rise in risk aversion, while the Japanese Yen continued to appreciate against the greenback, and market sentiment is likely to drive price action going into the North American session as the economic docket remains fairly light. Nevertheless, the U.S. leading economic indicator is expected to increase 0.2% in April after expanding 1.4% in the previous month, which would be the slowest pace of growth since a year, while the Philadelphia Fed manufacturing index is forecasted to widen to 21.3 in May from 20.2 in the month prior to mark the highest reading since December 2009.