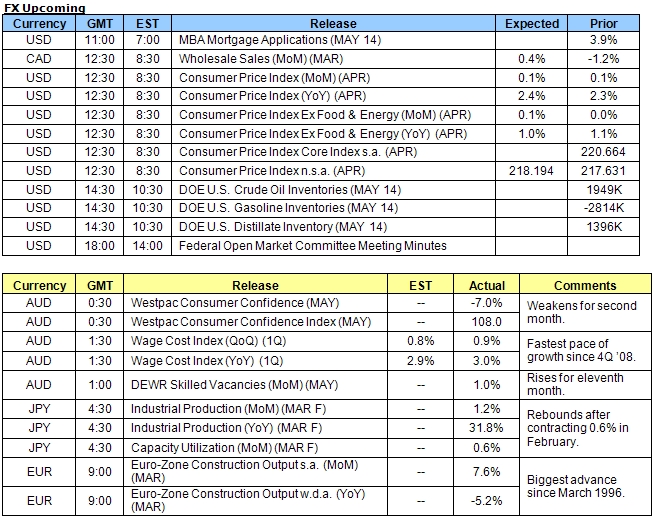 
At the same time, Bundesbank President Axel Weber said that “a tightening of the fiscal framework is imperative and urgently needed” while speaking to lawmakers in Berlin, and went onto say that the European rescue plan “strains the fundamental principle of the monetary union that individual countries are responsible for their own finances.”

Moreover, European Central Bank board member Juergen Stark argued that the EUR 750B bailout package will only help to “win time, but it won’t solve the fundamental problems of the individual euro-region countries” during an interview with a German television network. As investors remain skeptical of the European rescue plan, with policy makers continuing to take extraordinary steps to curtail the risks for contagion, the ongoing turmoil in the region may lead the Governing Council to maintain a loose policy stance throughout the second-half of the year as the central bank aims to balance the risks for the economies operating under the fixed-exchange rate system. Nevertheless, the economic docket showed construction outputs in the Euro-Zone increased 7.6% in March after contracting a revised 7.2% in the previous month to mark the biggest rise since March 1996, while building activity weakened at an annualize pace of 5.2% to mark the slowest pace of decline since December 2009.

The British Pound weakened against the greenback for the sixth day, with the exchange rate slipping to a low of 1.4240 in the European trade as the Bank of England maintained a relatively dovish outlook for future policy. The May meeting minutes showed the MPC voted unanimously to hold the benchmark interest rate at 0.50% and maintain the asset purchase target at GBP 200B earlier this month as “the committee’s central view remained that the substantial margin of spare capacity would continue to bear down on inflation” over the coming months. At the same time, the BoE said that “near-term inflation prospects had risen, reflecting the depreciation of sterling and higher oil prices,” and went onto say that “some members interpreted recent developments in firm’s cost and pricing behavior as potentially suggesting that the damping effects on inflation from the margin of spare capacity might be somewhat weaker” than initially expected. In addition, the governing board reiterated that “a significant fiscal consolidation” was needed going forward in order for the nation to “avoid unnecessary increases in the cost of issuing public debt,” and argued that the ballooning budget deficit has “created further uncertainty about the prospects for activity and inflation.”

The greenback rallied against most of its currency counter parts as investors scale backed their appetite for risk, while the Japanese Yen appreciated across the board, with the USD/JPY slipping below the 200-Day SMA (91.18) to a fresh weekly low of 91.09. However, the dollar is likely to face increased volatility going into the North American session as consumer prices in the world’s largest economy is forecasted to expand at an annualized pace of 2.4% in April, while the FOMC is scheduled to release its April meeting minutes later today at 18:00 GMT. The central bank is likely to maintain a dovish policy stance as the deterioration in the labor market paired with tightening credit conditions continue to weigh on the recovery, but a shift in the Fed’s economic assessment could stoke a sharp move in the exchange rate as investors mull over the outlook for future policy.