At the same time, Chancellor of the Exchequer George Osborne said that he would like monetary policy “to remain supportive” as the government aims to tackle the budget deficit, and went onto say that he “would welcome” Mr. King’s long term view to include  “housing costs in the CPI inflation target.”

Consumer prices in the U.K. increased 0.6% for the second consecutive month in April, while the headline reading for inflation expanded at an annualized rate of 3.7% amid expectations for a 3.5% rise. At the same time, the core CPI unexpectedly increased to 3.1% from 3.0% in March, which was the highest reading since January, and price pressures may continue to intensify over the coming months as policy makers expect inflation to hold above the 2% throughout 2010. However, Governor King argued that the “persistent” weakness in the economy will ultimately temper the rise in inflation, and said that the MPC stands ready to “expand or reduce the extent of monetary stimulus as needed” as the central bank maintains its dual mandate to ensure price stability while promoting full-employment. However, as the BoE is scheduled to release its meeting minutes tomorrow at 8:30 GMT, a shift in the central bank’s outlook could stoke increased volatility in the exchange rate as investors weigh the prospects for future policy.

The Euro tipped higher for the second day and advanced to a high of 1.2431 as investors raised their appetite for risk, while consumer prices increased 0.5% in April to top forecasts for a 0.4% rise. Moreover, inflation advanced to an annualized pace of 1.5% from 1.4% in March to mark the fastest pace of growth since December 2008, while the core CPI slipped to 0.8% from 1.0% during the same period, which was largely in-line with expectations. However, the German ZEW investor confidence survey tumbled to 45.8 in May from 53.0 in the month prior, with the gauge for the Euro-Zone falling back to 37.6 from 46.0 in April, while the trade surplus narrowed to seasonally adjusted EUR 0.6B from a revised EUR 3.4B in February. Nevertheless, the European Union announced that it has sent EUR 14.5B to Greece to help the ailing nation meet its debt obligations for May and June, and the debt crisis may continue to drag on the single-currency as investors remain skeptical of the EUR 750B rescue plan as it fails to address the root cause.

U.S. dollar price action was mixed overnight, with the USD/JPY extending the previous days advance to reach a high of 92.95 during the overnight trade, and the reserve-currency is likely to face increased volatility going into the North American session as the economic docket is expected to reinforce an improved outlook for the world’s largest economy. Producer prices in the U.S. are expected to increase 0.1% in April following the 0.7% expansion in the previous month, while price pressures are projected to increase at an annual pace of 5.6% during the same period after rising 6.0% in the month prior. At the same time, housing starts are forecasted to increase 3.8% to an annualized pace of 650K from 626K in March, while building permits are anticipated to hold flat at 680K in April, and the rise in growth and inflation could push the greenback higher as the economic recovery gathers pace. 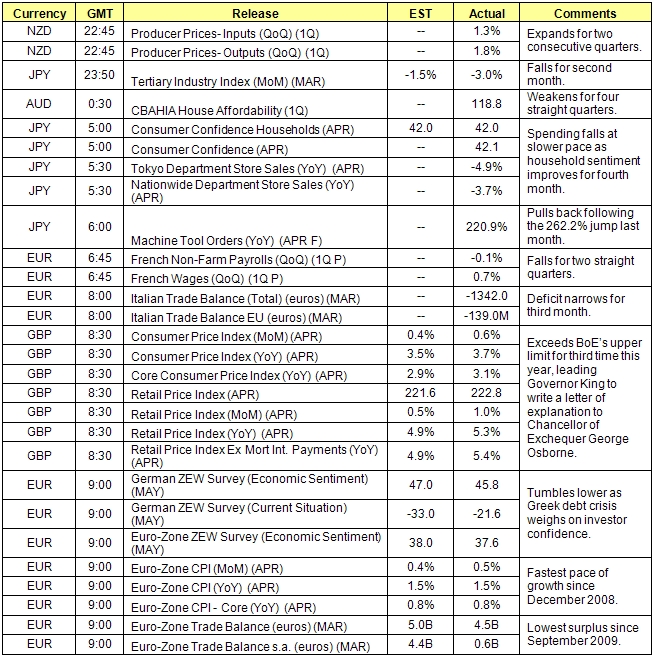