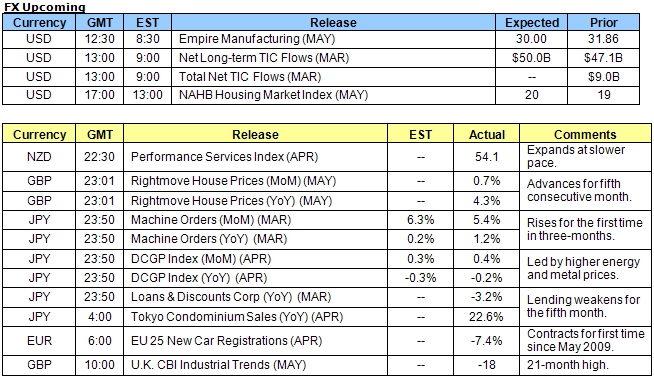 
U.K. Chief Secretary to the Treasury David Laws said that the Bank of England, as well as Treasury officials, deemed it “responsible and safe” for the government to begin lowering the budget deficit, and noted that the efforts to better-manage public finances would “help ensure there’s credibility in the new arrangements in the U.K.” as the nation’s sovereign credit rating remains at risk.

As a result, market participants speculate the BoE to maintain a loose policy stance going into the second-half of the year as the central bank continues to see a risk for a protracted recovery, and the MPC may support the economy throughout 2010 as it aims to balance the risks for the economy. However, Governor Mervyn King may drop his dovish bias as inflation is expected to exceed the upper limit for the third-time this year, and the stickiness in prices could lead the governing board to normalize policy further over the coming months as the economic recovery gathers pace. Meanwhile, the Rightmove home price index increased 0.7% to May after surging 2.6% in the previous month to mark the fifth consecutive monthly advance, while the survey showed a 4.3% rise from the previous year.

The Euro broke below the 2008 low (1.2328) and slipped to 1.2235 during the overnight trade as investors scaled back their appetite for risk, and the single-currency may continue to trend lower going into the North American session as market participants remain skeptical that the European rescue plan will be enough to stem the downside risks for the region. Meanwhile, Greece’s Finance Ministry said that they expect to receive the first EUR 14.5B installment tomorrow as the ailing nation tries to meet its debt obligations for May and June, while European Central Bank board member addressed fears surrounding the crisis and said that “nobody is question the euro” during an interview with a radio station in Austria. At the same time, board member Ewald Nowotny argued that slower growth remains the main problem for the euro-region as inflation remains subdued, and noted that the single-currency is in a “safe, normal range” against the U.S. dollar despite the recent drop in the exchange rate.

The rise in risk aversion has certainly pushed the reserve currency higher against most of its major counterparts, while the USD/JPY slipped to a low of 91.75 as the Japanese Yen advanced across the board. As equity futures foreshadow a lower open for the North American market, the reserve currency looks poised to push higher throughout the day as it continues benefits from safe-haven flows. Nevertheless, the economic docket is expected to show manufacturing in the Empire state expand at a slower pace in May as market participants forecast the factory survey to weaken to 30.00 from 31.86 in the previous month, while demands for U.S. assets are expected to expand $50.0B during the same period after increasing $47.1B in April.