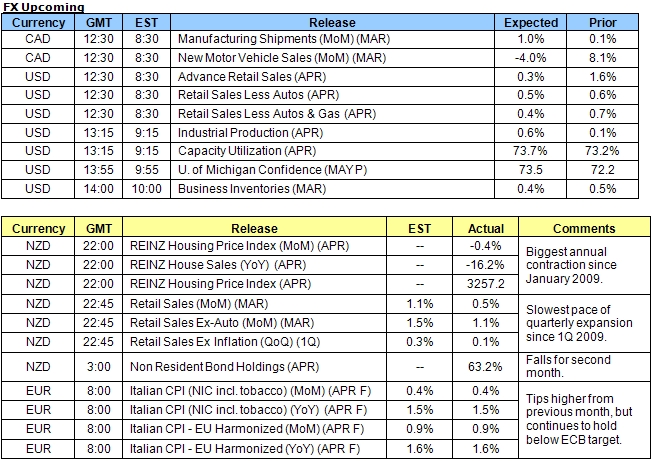 
Meanwhile, European Central Bank President Jean-Claude Trichet said that the region needs fundamental changes that will increase the transparency of fiscal policy, and reiterated that the Governing Council’s approach for monetary policy remains credible as inflation expectations remain well anchored during an interview with the Handelsblatt newspaper.

At the same time, ECB board member Gertrude Tumpel-Gugerell said that price stability must be maintained “without compromise” as policy makers aim to encourage a sustainable recovery throughout the region, and went onto say the nations struggling to manage their public finances must make deficit reduction their top priority in an interview with Format magazine. Meanwhile, the economic docket showed consumer prices in Spain advanced to an annualized pace of 1.5% in April from 1.4% in the previous month, while the core rate of inflation unexpectedly slipped 0.1% from the previous year to mark the first contraction since 1986. As price pressures remain subdued, the Governing Council is likely to maintain a dovish bias going into the second-half of the year and may look to support the economies operating under the single-currency throughout 2010, which is likely to weigh on the exchange rate as investors scale back expectations for an ECB rate hike..

The British Pound weakened for the third day to reach a fresh weekly low of 1.4498, and the GBP/USD looks poised to test the monthly low at 1.4479 as the 20-Day SMA (1.5112) crosses below the 50-Day SMA at 1.5147. Nevertheless, the Bank of England is scheduled to release its policy meeting minutes next Wednesday at 8:30 GMT, and a shift in the central bank’s rhetoric is likely to stoke increased volatility in the exchange rate as investors weigh the outlook for future policy. BoE Governor Mervyn King maintained a dovish outlook during the central bank’s quarter inflation report released earlier this week and saw increased downside risks for the U.K. as a result of the ongoing weakness in the private-sector but, the MPC may look to drop its dovish tone as the headline reading for inflation is expected to exceed the central bank’s upper limit for third time this year.

The greenback rallied against most of the majors following the rise in risk aversion, while the USD/JPY extended the decline from the previous day and slipped to a low of 92.25 as the Japanese Yen advanced across the board. However, as retail spending in the world’s largest economy is expected to expand for the seventh consecutive month in April, the rise in private consumption could stoke a shift in risk sentiment as the economic recovery in the U.S. gathers pace. In addition, industrial outputs are forecasted to increase 0.7% during the same period after tipping 0.1% in March, while the U. of Michigan Confidence survey is projected to rebound to 73.5 in May after slipping to 72.2 in the previous month.

Will the EUR/USD Test The 2008 Lows? Join us in the Forum