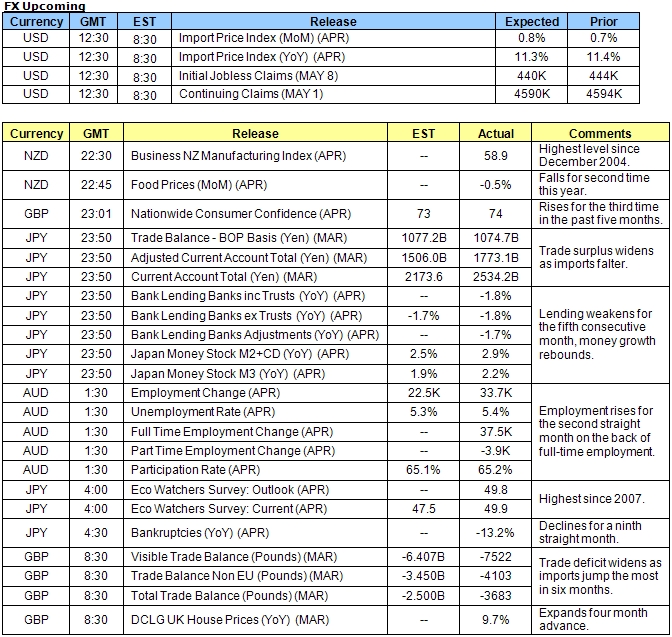 Meanwhile, ECB board member Lorenzo Bini Smaghi argued that the European Union should have taken decisive action back in February to aid Greece, and went onto say that the economies operating under the single-currency must take the necessary steps to bring their public finances in-line with the stability pact in a written option piece that was submitted to an Italian newspaper.

The ECB reiterated that the interest rate is “appropriate” in its monthly reports as policy makers expect price growth to remain “moderate” over the policy-relevant horizon, but continued to see a risk for an “uneven” recovery this year as the governments under the fixed-exchange rate system struggle to manage their public finances. Moreover, the central bank said that “the large fiscal imbalances will, in general, require a stepping-up of current efforts,” and added that the Greek bailout plan should help to safeguard financial stability in the euro-area. At the same time, the ECB announced that economic forecasters expect the region to grow at an annualized pace of 1.1% this year amid an initial forecast for a 1.2% expansion in the growth rate, while inflation is projected to increase 1.4% in 2010 versus projections for a 1.3% rise in price growth. As the Greek crisis continues to hamper the outlook for the Euro-Zone, the ECB may look to support the economy throughout the second-half of this year, and may even keep rates on hold going into 2011 as the Governing Council aims to balance the risks for the region.

The British Pound pared the overnight advance and slipped to a low of 1.4745 during the European trade as the economic docket spurred a mixed outlook for the U.K, while investors speculate Prime Minister David Cameron’s pledge to cut the budget deficit will put additional pressures on the Bank of England to maintain a loose policy stance throughout 2010.  A report by the Office for National Statistics showed Britain’s visible trade deficit jumped to GBP 7.522B in March from a revised GBP 6.305B in the previous month as the rebound in imports outpaced the rise in exports, while the Department for Communities and Local Government’s home price index surged 9.7% during the same period after expanding a revised 7.3% in February. In addition, the Nationwide bounced back in April, with the index advancing to 74 from a revised 73 in March, but the ongoing uncertainties surrounding the outlook for monetary and fiscal policy may continue to weigh on the exchange rate as investors weigh the prospects for a sustainable recovery.

U.S. dollar price action was mixed overnight, with the USD/JPY retracing the overnight advance to reach a low of 92.74, and the greenback could face increased volatility during the North American trade as Fed Chairman Ben Bernanke is scheduled to speak at the Philadelphia Fed Conference at 16:30 GMT. Nevertheless, the economic docket is expected to show a drop in initial and continuing jobless claims, while import prices are expected to increase another 0.8% in April following the 0.7% in the previous month, and the drop in unemployment paired with the rise in price pressures could stoke speculation for a rate hike later this year as the recovery gathers pace.