At the same time, BoE Deputy Governor Charles Bean said that he remains surprised by the stickiness in prices as inflation exceeds the central banks upper limit for the second time this year, and went onto say that recent price developments have certainly exceeded the MPC’s expectations while growth remains roughly in line with their forecast.

Governor King held a cautious outlook for the U.K. and said that the downside risks for growth have “increased somewhat” and stressed that it is “imperative” for the government to lower the budget deficit sooner rather than later, but went onto say that inflation is likely to remain above target throughout 2010 as the BoE sees price growth averaging 1.4% over the next two-years. In addition, the central bank head stated that the global economy is “only part way through the financial crisis” as governments around the world struggle to manage their public finances, but expects the recovery “to gather strength” going forward as the expansion in monetary and fiscal policy continues to feed through the real economy. At the same time, Mr. King reiterated that the MPC maintains the option to expand its emergency measures and have not ruled out increasing its asset purchases beyond the GBP 200B target, and noted that the central bank can raise borrowing costs or start selling assets when it’s ready to tighten monetary policy. Meanwhile, jobless claims in the U.K. tumbled 27.1K in April following a 32.7K contraction in the previous month, which unexpectedly pushed the claimant count rate down to 4.7% from 4.8% in the previous month, while the ILO’s gauge for unemployment held at 8.0% during the three-months through March to mark the highest reading since 1994.

The Euro halted the two-day decline and rallied to a high of 1.2737 as the economic docket reinforced an improved outlook for the region however, the overnight advance appears to be tapering off as investors scale back their appetite for risk. Meanwhile, the European Commission said that Estonia is on track to join the fixed-change rate system in 2011 even as the ECB warns that the Baltic state may struggle to prevent “high rates of inflation,” which could lead to a buildup in macroeconomic imbalances, and said that the nation’s efforts to lowering price growth is “sustainable” during a press release in Brussels. Nevertheless, economic activity in the Euro-Zone expanded 0.2% in the first-quarter to exceed expectations for a 0.1% rise, while GDP in Germany unexpectedly grew during the first three-months of 2010 after holding flat in the fourth-quarter, led by a rise in exports and capital investments. In addition, industrial outputs in the euro-region jumped 1.3% in March, which topped projections for a 1.0% rise, while production increased 6.9% from the previous year to mark the fastest pace of growth since May 2000.

The was greenback was modestly lower during the overnight trade following the rise in risk appetite, with the USD/JPY paring the previous day’s decline to reach a high of 93.05, but risk sentiment appears to be turning over ahead of the North American session, which could stoke a rise in safe haven flows. Nevertheless, the economic docket is expected to show the trade deficit for the world’s largest economy widen to $40.5B in March from $39.7B in the previous month, which would be the highest reading since December 2008, while the budget statement is expected to show a shortfall of $56.0B in April as the government continues to support the real economy. 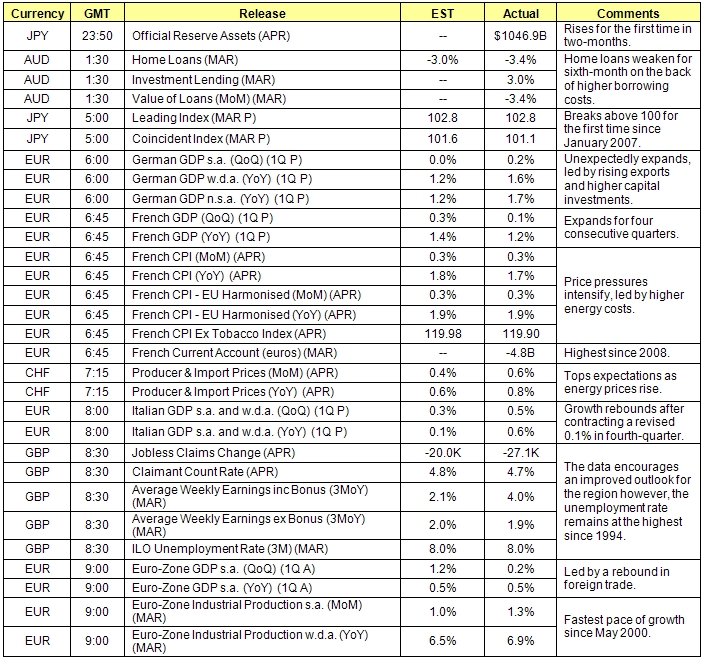