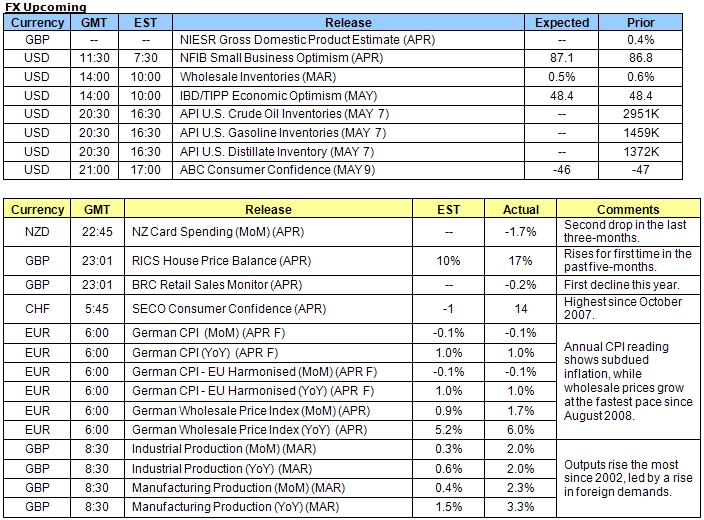 
At the same time, Fitch Ratings said that the bailout plan should “materially reduce the risks of self-fulfilling market ‘runs’ on European sovereigns,” but went onto say that it remains “too early to come to a definitive judgment on the broader long-term implications for the fiscal and financial stability of the euro area.” In addition, government officials in Greece said that they will make a formal application for the emergency funds later today, with the first payment from the EU totaling EUR 14.5B, while the International Monetary Fund will supply EUR 5.5B.

At the same time, European Central Bank board member Ewald Nowotny held a dovish outlook for future policy and saw little risk for the new measures to stoke higher inflation in the region during a interview with an Austrian radio program, and argued that price growth would only increase should policy makers “not be able to control the amounts of funds.” Nevertheless, the final CPI reading for Germany showed a 0.1% contraction in April, which was largely in-line with expectations, while the annualized rate held steady at 1.0% to match the initial forecast from the end of the previous month. However, wholesale prices in Europe’s largest economy jumped 1.7% during the same period to top expectations for a 1.7% rise, while price pressures jumped at an annualized pace of 6.0% from the previous year to mark the fastest pace of growth since August 2008.

The British Pound weakened against the greenback for the eighth consecutive day as a result of the uncertainties surround the outlook for fiscal policy, with the exchange rate falling back below 1.4800 during the European trade from a high of 1.4887. According to an article in the U.K. Telegraph, Prime Minister Gordon Brown’s Labour Party and the Liberal Democrats are now involved in discussion, which has spurred speculation that the two side may come together to form a coalition, while others still see the Conservatives and the Democrats coming together to form a majority. Meanwhile, the economic docket showed industrial outputs in the U.K. jumped 2.0% in March after increasing a revised 0.9% in the previous month, which exceeded expectations for a 0.3% expansion, while manufacturing jumped 2.3% to mark the fastest pace of growth since 2002, led by a rise in foreign demands.

The U.S. dollar bounced back against most of its currency counterparts as investors scaled back their appetite for risk, while the USD/JPY halted the two-day advanced and slipped back below the 50-Day SMA (92.29) to reach a low of 92.24. As the economic docket remains for U.S. and Canada remain fairly light for Tuesday, risk aversion is likely to dictate price action going into the North American session as the futures market foreshadow a lower open for equities. Nevertheless, the NFIB Small Business Optimism index is expected to rebound to 87.1 in April from 86.8 in the previous month, while the IBD/TIPP Economic Optimism survey is expected to hold steady at 48.4 for the second month in May.