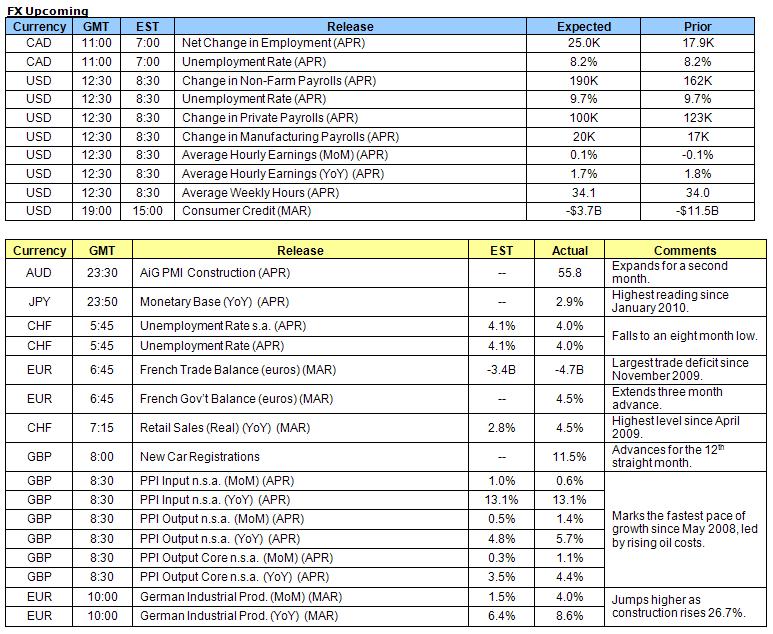 
According to the polls, David Cameron’s Conservative party picked up 290 seats out of the 650 seats available in the House of Commons, with Prime Minister Gordon Brown’s Labour party obtaining 237, while Nick Clegg’s Liberal Democrats grabbed 51 seats.

Meanwhile, Moody’s Investor Services reaffirmed its AAA credit rating for Britain and said that the hung parliament is not a “direct threat” to the stable outlook held by the group as they expect to see a “fiscal adjustment that is no looser nor slower than was outlined by all three political parties during their respective pre-election campaigns.” Moreover, the rating agency argued that “the absence of a one-party majority does not necessarily weaken the government’s ability nor its inclination to stabilize public debt metrics in the coming years,” and added that “it will also not prevent the government from doing so at levels that are consistent with its current AAA rating.” As a result, market participants may look towards the Bank of England’s rate decision next week on May 10th as investors speculate the central bank to normalize policy this year, but the MPC may choose not to release a policy statement as we saw during its policy meeting last month as the government remains divided. Nevertheless, the Halifax home price index unexpectedly slipped 0.1% in April after expanding 1.0% in the previous month, while producer output prices jumped 1.4% during the same period to top expectations for a 0.5% rise.

The Euro halted the four-day decline and pushed to a high of 1.2797 on Friday as Germany agreed to provide as much as EUR 22.4B to bailout Greece, but fears of contagion may continue to weigh on the exchange rate over the near-term as European policy makers convene in Brussels later today to draw “conclusions” on the current situation of the economies operating under the fixed-exchange rate system. At the same time, Moody’s said that its outlook for Italy remains stable, but argued that the nation requires “decisive” action to bring back its public finances back in-line with the stability pact after the Finance Ministry lowered its growth forecast and raised its debt projections. Meanwhile, the economic docket showed industrial outputs in Germany jumped 4.0% in March, which more than doubled forecasts for a 1.5%, while production increased 8.6% from the previous year to mark the fastest pace of growth in over a decade.

The greenback was mixed during the overnight trade, with the USD/JPY paring the sharp decline from the previous day to reach a high of 92.78, and the reserve currency is likely to face increased volatility going into the North American session as market participants expect the U.S. labor market to improve for the second-consecutive month in April. Non-farm payrolls in the world’s largest economy is projected to rise another 190K following the 162K expansion in March, which would be the first back-to-back rise in employment since 2007, while the jobless rate is anticipated to hold steady at 9.7% for the fourth month after falling back from 10.0% back in January. In addition, consumer credit is forecasted to contract $3.7B in March after tumbling $11.5B in the previous month, and the data could lead the Federal Reserve to hold a loose policy stance going into the second-half of the year as households continue to face the deterioration in the labor market paired with tightening lending standards.

Will Fears of Contagion Continue to Weigh on the EUR/USD? Join us in the Forum

Will Market Panic Leverage or Dampen the Dollar’s Response to NFPs?