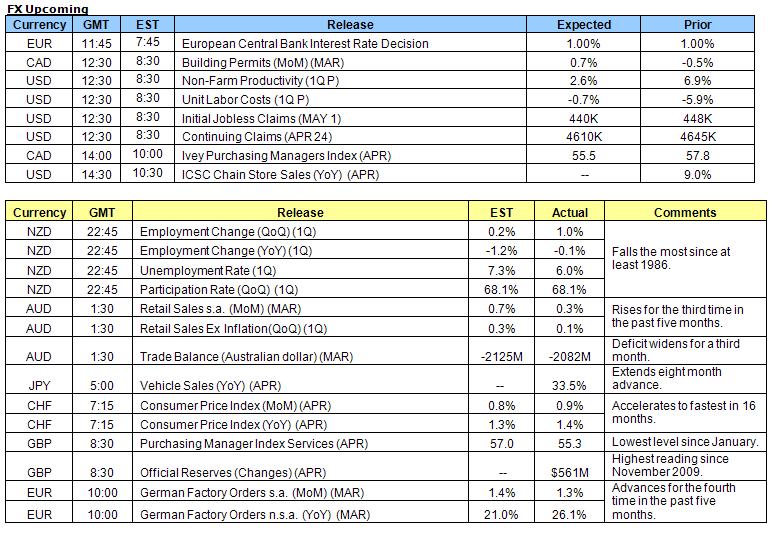 At the same time, European Union Economic and Monetary Affairs Commissioner Olli Rehn argued that the Greek crisis “has to do with the euro-zone as a whole,” and said policy makers must “stop that fire so it won’t spread to other countries as well” during a speech in Brussels.

As investors remain skeptical of the Greek bailout plan and continue to see uncertainties surrounding the outlook for the region, the European Central Bank is widely expected to hold the benchmark interest rate at 1.00% at its rate decision later today, and comments from central bank President Jean-Claude Trichet could stoke increased volatility in the exchange rate as market participants weigh the prospects for future policy. Mr. Trichet is likely to maintain a loose stance going into the second-half of the year as the ongoing turmoil in public finances continues to put additional pressures on monetary policy, and dovish commentary following the press conference at 12:30 GMT could push the single-currency lower as investors scale back expectations for a rate hike over the medium-term. Nevertheless, factory orders in Germany jumped 5.0% in March to top forecasts for a 1.4%, while demands increased 26.1% from the previous year to mark the fastest pace of growth in over a decade.

The British pound weakened for the fifth-day and broke out of its recent range to reach a fresh monthly low of 1.5018 during the European session, and the currency may face choppy price action over the remainder of the week as investors mull over the outcome of the U.K. election. According to a YouGov poll, the Conservatives maintained a 35% support, while the Labour party was at 28%, which was 2 percentage points lower from the previous day, with Liberal Democrats gaining 4 points to 28%. However, as market participants price in the risks for a hung Parliament, investors may look towards the Bank of England rate decision scheduled for the following week on May 10th as they speculate the central bank to normalize policy later this year. Meanwhile, service-based activity in the U.K. expanded at a slower pace in April, with the PMI reading slipping to 55.3 from 56.5 in the previous month amid expectations for a rise to 57.0 as the volcanic ash from Iceland grounded more than 100K flights in Europe.

U.S. dollar price action was mixed overnight, with the USD/JPY slipping back below the 20-Day SMA (93.49) to reach a fresh weekly low of 93.29, and the reserve-currency could face heavy volatility throughout the North American trade as Treasury Secretary Timothy Geithner and Fed Chairman Ben Bernanke are scheduled to speak later today. At the same time, central bank board member Thomas Hoenig is expected to testify in front of the House financial Services Oversight and Investigations Subcommittee at 14:00 GMT, with Federal Reserve Board’s Division of Banking Supervision and Regulation director Patrick Parkinson speaking at the Chicago Banking Conference at 14:50 GMT, and the slew of comments from U.S. policy makers could shake up the currency market as investors speculate the FOMC to further unwind its emergency measures over the coming months. Nevertheless, the economic docket is expected to show nonfarm productivity advanced another 2.6% in the first-quarter following the 6.9% expansion during the last three-months of 2009, while unit labor costs are forecasted to slip 0.7% after contracting 5.9% in the fourth-quarter. Moreover, initial jobless claims are projected to weaken to 440K in the week ending May 1 from 448K, while continuing claims are anticipated to fall to 4610K during the week ending April 24 from 4645K as the economic recovery continues to gather pace.