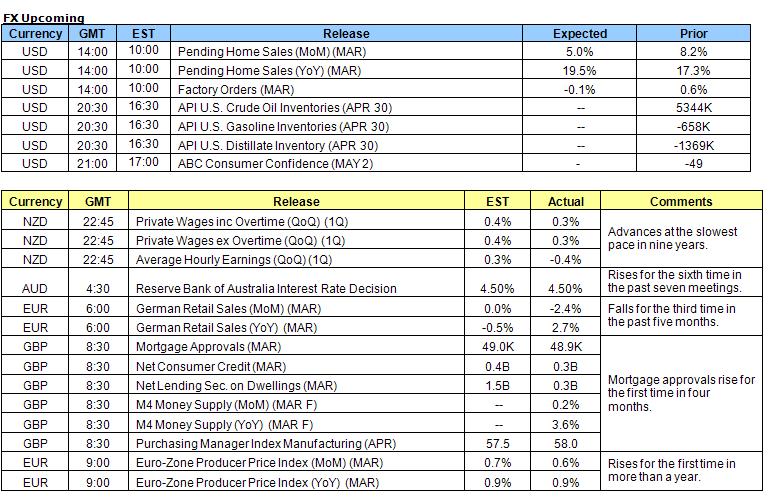 
Also weighing on the euro is Luxembourg’s announcement that it plans to issue a 2 billion euro bond this month, with the statment followed by ECB’s Merch saying that “it may not be the best time for a sovereign to come out.” Indeed, many bankers and traders will concur with Merch as the speculation mill continues to churn as investors believe that the $146 billion life line awarded to Greece over the weekend will not be successful to stem the crisis from spreading to its euro-area members.

At the same time, European Central Bank Council member, Erkki Liikanen said “hopefully” cooperation in the euro area strengthens as a result of the Greek crisis, and went onto say that “Economic and Monetary Affairs Commissioner Oilli Rehn is working to increase economic policy coordination and I support him.” Furthermore,  ECB’s council member Yves Merch publicized that President Jean-Claude Trichet has been “totally consistent” on the back’s collateral rules, and had to change its rules to ensure that Greece’s bonds would continue to be eligible as collateral. Nevertheless, the economic docket during the European session showed that European producer prices in March advanced for the first time in more than a year as companies passed on the burden of higher costs as the economy strengthen, with figures showing the annualized rate climbing 0.9%, which was in line with economists’ expectations.  On the other hand, a separate report illustrated that retail sales in Europe’s largest economy unexpectedly retreated 2.4% in March after rising a revised 1.1% the previous month. Looking ahead, the ECB is likely to postpone withdrawing economic stimulus measures as Greece’s debt crisis and the risk of growth in the region lead governments to cut their budget deficits.

The British pound extended its two day decline to reach an overnight low of 1.5169 as the GBP/USD has worked its way trade into congestion since mid last week. The pair may continue its decline ahead of Thursday’s election as market participants see a risk for a hung parliament following former British finance minister Nigel Lawson stating that “the prospect of a hung parliament is already priced into the markets” last Friday. Taking a look at the economic docket overnight, mortgage approvals rose for the first time in four months as property taxes lightened. Figures showed that lenders granted   48.9K loans, which was up from 46.9K in February, however was still shy of economists’ forecasts of 49.0K. At the same time, net consumer credit in March was 0.3B from a revised 0.6B the month prior, while the final reading of the M4 money supply (broad money – cash outside of banks) in March added an annualized 5.9%.  The readings paint a somewhat improved outlook for the housing market as it looks to slowly recover in the midst of households adding to their unsecured debt.   Looking ahead, investors are weighing in a 3% chance that the Bank of England will increase their key overnight lending rate 25 basis points at its rate decision meeting on May 10th, while forecasting rates to jump 52.7 basis points over the next 12 months, according to the Credit Suisse gauge of rate hike expectations.

The greenback rallied across the board, while the Aussie was down against all major currencies as risk appetite picked up during the last 24 hours. The U.S. dollar is likely to gain momentum going into the U.S. trade as the world’s largest economy is expected to show that pending home sales advanced 5.0% in March from the month prior, with the reading climbing 19.5% from a year ago.  At the same time, ABC consumer confidence and factory orders are also on tap.