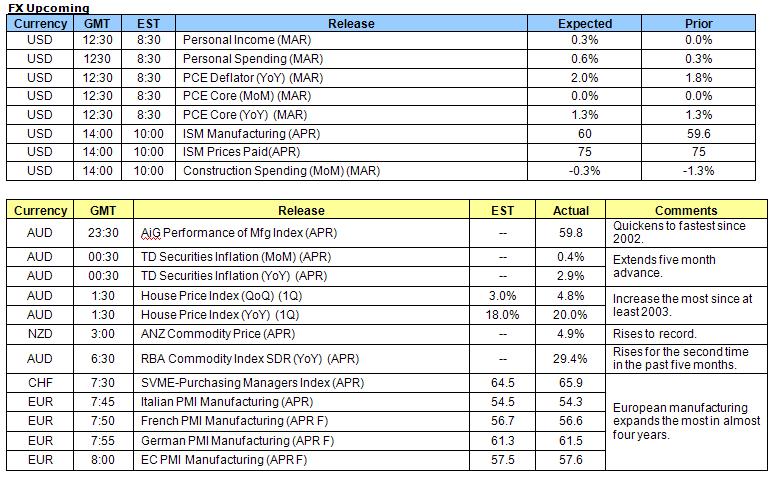 
Greece accepted the bailout from the IMF and the EU worth $146 billion in order avert default and prevent the countries debt crisis from spreading through the rest of the bloc, but failed to calm the markets as investors speculate that bailout will be unsuccessful to stem the crisis from spreading to nations such as Spain, Portugal and Ireland.  Furthermore, the European Central Bank decided to suspend collateral rules on banks depositing Greek bonds “until further notice.”

At the same time, European Central Bank Executive Board member, Lorenzo Bini announced that inefficiencies delayed the Greek rescue plan, and went onto say that the European crisis should help the EU to equip itself with “more efficient institutions and procedures.” Nevertheless, the economic docket showed that Europe’s manufacturing industry expanded at the fastest pace in almost four years, with the final reading for April rising to 57.6 from 57.6 the reading prior, and exceeding economists’ expectations of 57.5. As ECB President Trichet expects to see an uneven recovery this year, the Governing Council is widely expected to hold a loose policy stance going into the second-half of 2010 as it aims to stem the risks for the economies operating under the single-currency, but the central bank may look to normalize policy further later this year as it maintains its one and only mandate to ensure price stability.

The British pound extended the previous day’s decline to reach an overnight low of 1.5211, and looks to test the 50-day SMA (1.5208) for support. The GBP/USD may continue its southern journey ahead of Thursday’s election as market participants see a risk for a hung U.K. Parliament subsequent to Former British finance minister Nigel Lawson stating that “the prospect of a hung parliament is already priced into the markets” on Friday.  Looking ahead, investors are weighing in a 3% chance that the Bank of England will increase their key overnight lending rate 25 basis points at its rate decision meeting on May 10th, while forecasting rates to jump 52.7 basis points over the next 12 months, according to the Credit Suisse gauge of rate hike expectations.

The greenback strengthened against most of its major counterparts, while the Swiss Franc lost ground across the board following the rise in risk aversion, and the U.S. dollar is likely to face increased volatility going into the North American trade as the world’s largest economy is expected to show that personal spending and income advanced 0.6% and 0.3% respectively in March. At the same time, ISM manufacturing is forecasted to climb to 60.0 in April from 59.6 the previous month, while construction spending is surveyed to retreat 0.3% in March, extending the previous month’s decline.