Meanwhile, Prime Minister Gordon Brown said that the May 6 election remains “wide open” during a news conference in London, and went onto say that he will announce additional measures later this afternoon to help support the real economy as policy makers aim to encourage a sustainable recovery.

Economic activity in Europe’s second largest economy increased 0.2% in the first quarter of 2010, which missed forecasts for a 0.4% expansion in the growth rate, while GDP contracted at an annual pace of 0.3% versus expectations for a 0.1% decline. As the economic recovery remains fragile, the Bank of England is widely expected to maintain a loose policy stance going into the second-half of the year as households continue to face the deterioration in the labor market paired with tightening credit conditions, and the central bank is likely to hold a cautious outlook over the coming months as they aim to balance the risks for sticky prices paired with the tepid rebound in economic activity.

The Euro pulled back from the high (1.3339) as government official in Greece announced that they will request the bailout from the EU later today, and the ongoing turmoil throughout the region may continue to drag on the exchange rate as policy makers expect to see an uneven recovery this year. Meanwhile, business confidence in Germany jumped to a two-year high in April, with the IFO survey increasing to 101.6 from a revised 98.2 in the previous month, while the gauge for future expectations advanced to 104.0 from 102.0 in March to mark the highest reading since May 2007. In addition, industrial new orders in the Euro-Zone jumped 1.5% in February to top forecasts for a 1.0%, while demands increased 12.2% from the previous year, which was the fastest pace of growth since July 2007. As the economies operating under the single-currency struggle to balance their public finances, market participants speculate the European Central Bank to maintain a dovish policy stance throughout 2010 as the Governing Council anticipates the recovery to gather pace over the following year.

The U.S. dollar lose ground against most of its major counterparts, with the USD/JPY paring the overnight advance to reach a low of 93.30, and the reserve currency is likely to face increased volatility going into the North American session as market participants expect to see a 0.2% rise in demands for durable goods. At the same time, durables excluding transportation equipment are expected to rise 0.7% in March following the 0.9% expansion in the previous month, and the data is likely to encourage an improved outlook for the world’s largest economy as private sector spending remains one of the biggest drivers of growth. In addition, new home sales are expected to increase to an annualized pace of 325K from 308K in February, while Treasury Secretary Timothy Geithner is scheduled to hold a press briefing ahead of the G-20, G-7, IMF and World Bank conference at 18:00 EST. 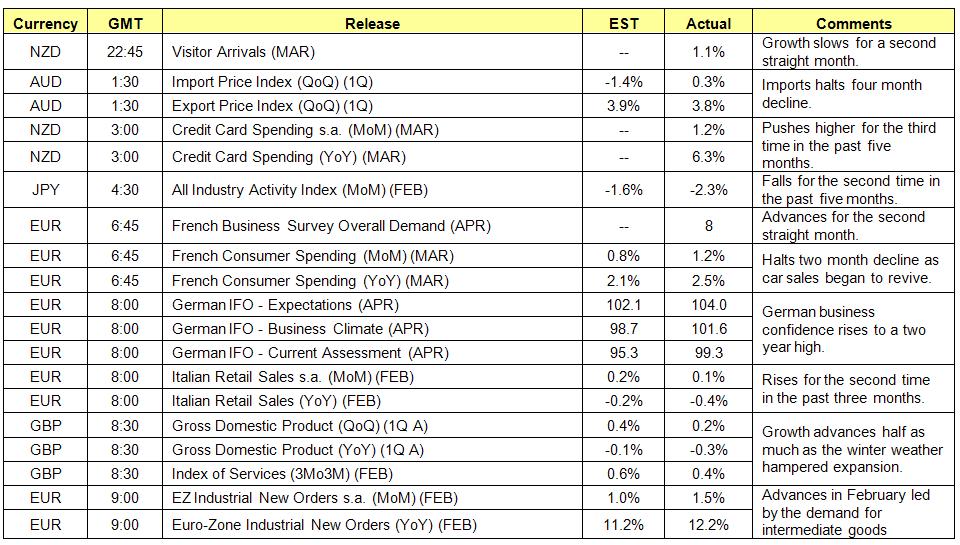