Meanwhile, Bundesbank President Axel Weber argued Greece may need up to EUR 80B in funds according to an article from the Wall Street Journal as he plans to tell Greek policy makers that the EUR 30B committed by the European Union may not be enough to help the ailing economy balance its budget, while the European Central Bank warned that “the continued deterioration in the quality of bank loans and the prospect of increasing loan losses imply that the net profit of many euro-area banks are likely to remain under pressure for time to come.”

Nevertheless, producer prices in Germany increased 0.7% in March to top forecasts for a 0.5% rise, led by an 8.4% advance in the cost of heating oil, while a separate report showed the current account deficit for the euro-region unexpectedly widened to 3.9B in February from a revised 1.7B in the previous month. At the same time, investor confidence in Europe’s largest economy improved for the first time in seven months as the ZEW survey increased to 53.0 in April from 44.5 in the previous month, while the gauge for the Euro-Zone jumped to a three-month high of 46.0 from 37.9 in March, and conditions may improve further over the coming months as policy makers aim to support the economies operating under the single-currency.

The British Pound pared the previous day’s decline and rallied to a high of 1.5432 during the European session following the bigger-than-expected rise in inflation, and the GBP/USD may test the previous week’s high at 1.5523 for short-term resistance as the exchange rate continues to trade above the 20-Day SMA (1.5229). Consumer prices in the U.K. increased 0.6% in March to top expectations for a 0.3% expansion, while the headline reading for inflation grew at an annualized pace of 3.4% to breech the central bank’s upper limit for the second time this year. Moreover, the core CPI unexpectedly increase 3.0% following the 2.9% expansion in the previous month, and rising price pressures could lead the Bank of England to normalize policy further going into the second-half of this year as the MPC aims to balance the risks for the real economy.

The greenback weakened against most of its major counterparts following the rise in risk appetite, with the USD/JPY extending yesterday’s advance to reach an overnight high of 92.88, and the pair looks poised to test the 20-Day SMA at 93.11 as price action holds above the 200-Day SMA (91.36). Nevertheless, the Bank of Canada is widely expected to keep rates unchanged at 0.25% later today as Governor Mark Carney pledges to leave interest rates low until the second half of the year, and comments from the central bank head is likely to stoke increased volatility in the USD/CAD as market participants weigh the prospects for future policy. At the same time, an upward shift in the BoC’s economic assessment is likely to spur expectations for a rate hike later this year as the recovery gathers pace, and hawkish commentary from the central bank could drive the exchange rate higher as the outlook for growth and inflation improves.


Do You Expect the EUR/USD to Maintain Its Current Range Over the Following Month? Join us in the Forum 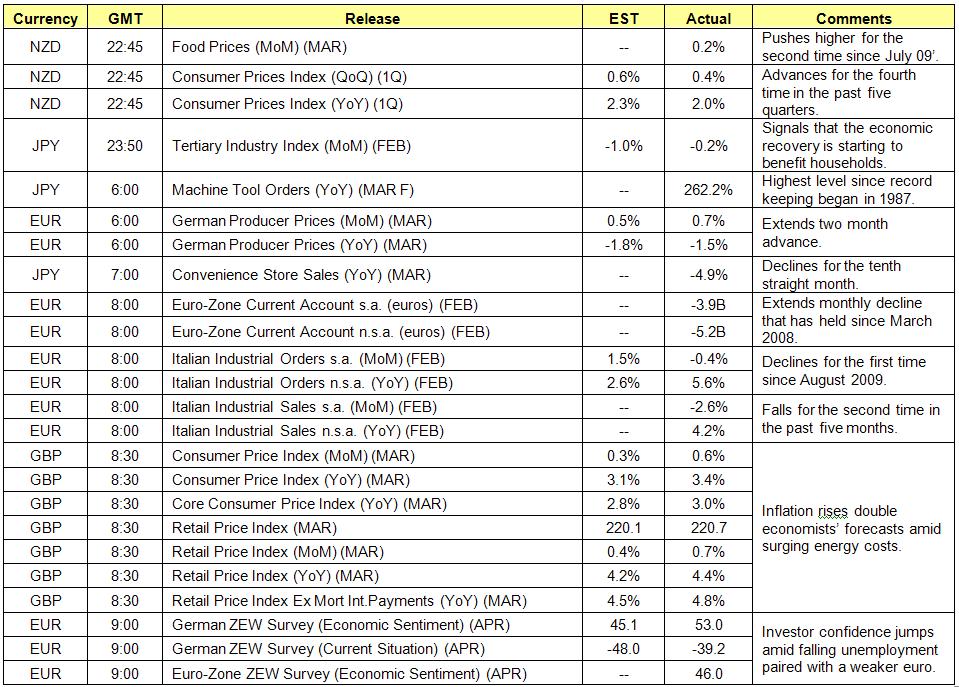