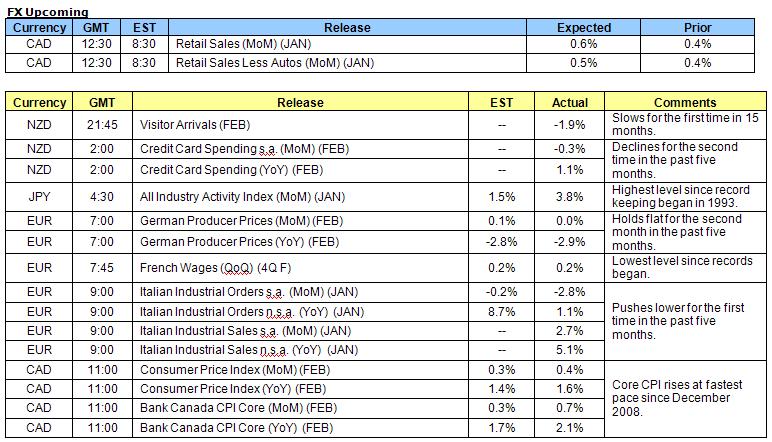 
The British Pound extended the previous day’s decline and slipped to a low of 1.5129 during the European trade as the Bank of England continued to see a risk for a double-dip recession. Central bank board member Andrew Sentance said that he’s certainly “encouraged” by the rebound in GDP during an interview with CNBC, but went onto say that “there is some risk of a double dip” recession as the financial system remains fragile.

Mr. Sentance argued that he would not “rule out some new shocks emerging on the financial front which could set back the economy,” and said that a “substantial fiscal tightening” would be required as the economic recovery gathers momentum. However, the rise in government spending will surely put additional pressures on the BoE to maintain a loose policy stance this year, and the MPC is likely to hold a dovish outlook for future policy going into the second-half of the year as they aims to balance the risks for growth and inflation. As a result, speculation for further easing would continue to drag on the exchange rate as investors scale back expectations for a rate hike later this year. Nevertheless, as the GBP/USD maintains the narrow range carried over from the previous week, the pair may continue to tend sideways over the remainder of the month as market participants weigh the prospects for future policy.

The Euro tipped lower against the greenback for the third day to reach a fresh weekly low of 1.3558, and the single currency is likely to maintain the narrow range carried over as investors mull over the risks for Greece to declare bankruptcy. Bundesbank board member Thilo Sarrazin said European policy makers should allow Greece to “declare bankruptcy” as the nation struggles to balance its budget, and argued that “there is absolutely no need to think about aid” during an interview with the Salzburger Nachrichten newspaper. As central bankers in Europe continue to voice their opposition for a Greek bailout, the ailing nation may look towards the International Monetary Fund for help as it aims to bring its public finances in-line with EU standards. Meanwhile, producer prices in Germany unexpectedly held flat in February, with the annualized rate slipping 2.9% from the previous amid expectations for a 2.8% decline, and subdued price growth is likely to lead the European Central Bank to hold a neutral policy stance going into the second half of the year as the Governing Council maintains its one and only mandate to ensure price stability.

The greenback advanced against most of its major counterparts, with the USD/JPY pushing to a high of 90.59 during the overnight trade, and risk trends are likely to dictate price action going into the North American trade as the economic docket remains fairly light. As equity futures foreshadow a higher open for the U.S. market, a rise in risk appetite could certainly weigh on the dollar as it remains the most popular funding-currency next to the Japanese Yen, but most of the major currencies are likely to maintain its current range going into Friday’s session as market liquidity tapers off ahead of the weekend.