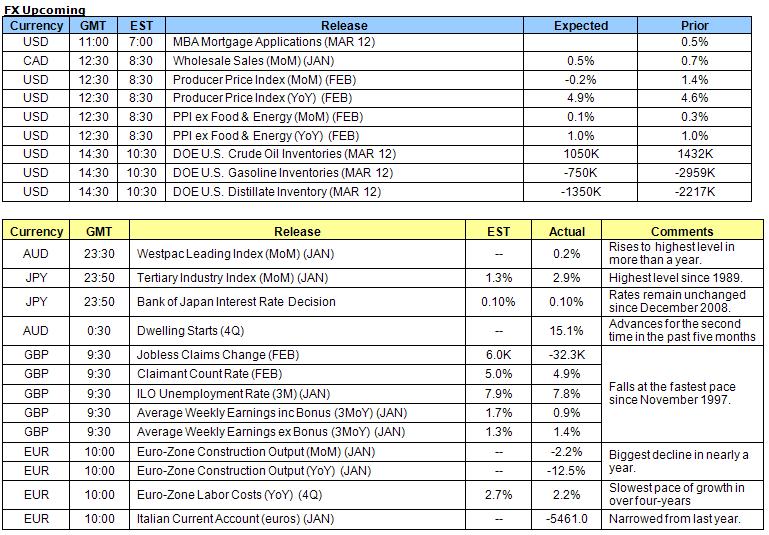 
Meanwhile, the Bank of England meeting minutes showed the governing board voted unanimously to keep the benchmark interest rate at 0.50% and to maintain the asset purchase target at GBP 200B, while “some members considered that the upside risks to inflation had increased slightly over the month.”

The BoE argued that “If the economic recovery gathered momentum and upside pressures on inflation from energy prices and the exchange rate continued, there was a risk that the current period of above- target inflation would be more prolonged,” and expects price growth “to remain well above the target over the months ahead” as the recovery gathers momentum. At the same time, the MPC said that the ongoing slack in the economy is likely to drag on inflation and saw a risk for economic activity to remain below capacity for an extended period of time, and the MPC is likely to hold a neutral policy stance throughout the first-half of the year as policy makers aim to balance the risks for the economy. Nevertheless, jobless claims in the U.K. slipped 32.3K to 1.59M in February to mark the fastest pace of decline since November 1997, while the claimant count rate unexpectedly slipped to 4.9% from 5.0% during the previous month. Moreover, average weekly earnings including bonuses increased 0.9% during the three-months through January after rising a revised 0.7% in the previous month, while earnings excluding bonuses expanded 1.4% during the same period to top forecasts for a 1.3% rise.

The Euro tipped higher overnight to reach a high of 1.3814, but the lack of momentum to cross back above the 50-Day SMA at 1.3866 may keep the pair within the narrow range carried over from the previous week as investors weigh the outlook for future policy.  European Central Bank board member Axel Weber, who many assume will be the next President of the central bank, said that the Governing Council needs to be more “dynamic” in its assessment for the risk premium it sets on the collateral put up by commercial banks, and went onto say the governments operating under the single-currency should allow Greece to “help itself” as policy makers are always looking to invent “new tools.” Meanwhile, construction outputs in the Euro-Zone slipped 2.2% in January after falling a revised 1.0% in the previous month, with the annualized rate tumbling 12.5% from last year to mark the biggest decline since February 2009. Moreover, labor costs in the euro-region increased at an annual pace of 2.2% in the fourth-quarter, which is the slowest pace of growth since in more than four-years, and the ongoing weakness in the private sector is likely to keep a lid on inflation as the ECB expects to see an uneven recovery this year.

The greenback continued to weaken against most of its major counterparts as investors raised their appetite for risk, while the USD/JPY pared the previous day’s decline to maintain the narrow range carried over from the previous. As equity futures foreshadow a higher open for the U.S. market, the rise in risk appetite is likely to weigh on the reserve currency throughout the North American trade, but comments from Fed Chairman Bernanke could spark a shift in market sentiment as the central bank head is scheduled to testify in front of the House Financial Services Committee at 18:00 GMT. Nevertheless, producer prices in the U.S. are expected to fall 0.2% in February after rising 1.4% in the previous month, while the annualized rate is forecasted to increase 4.9% from the previous year after rising 4.6% in the previous month.