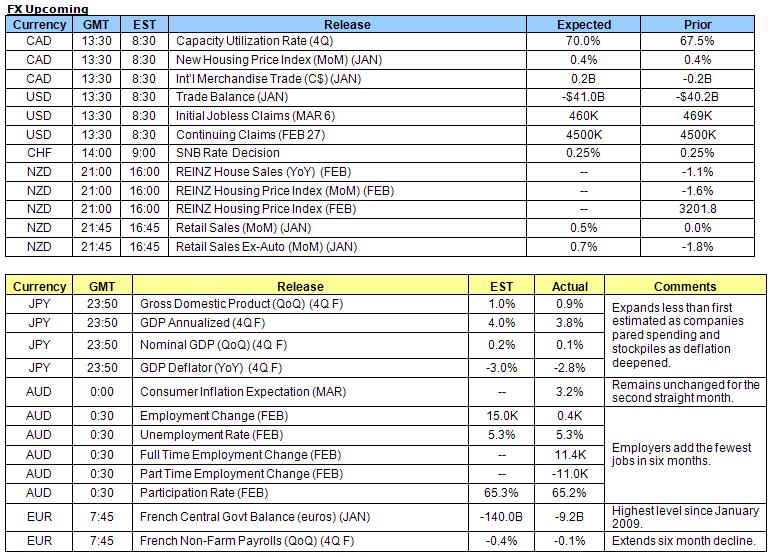 
The BoE quarterly inflation attitudes survey showed consumer price expectations rose to an annualized rate of 2.5% from 2.4% in November to mark the highest reading since 2008, and the rise could lead the central bank to maintain a wait-and-see approach over the coming months as policy makers aim to balance the risks for the U.K. economy. However, as market participants speculate the MPC to expand its asset purchase program in the month’s ahead, dovish rhetoric from the BoE could drive the exchange rate lower as policy makers continue to see a risk for a protracted recovery. Nevertheless, the National Institute of Economic and Social Research said economic activity increased 0.3% during the three-months through February after expanding a revised 0.6% during the previous month, but went onto say that the economy will not return to “its peak at the start of 2008 until 2012.”

The Euro tipped higher for the second day, with the exchange rate rising to a high of 1.3666 during the overnight trade, and we may see the single-currency continue to trend sideways going into the U.S. trade as the European Central Bank maintains a cautious outlook for the region. The central bank’s monthly report reiterated that interest rates remain “appropriate,” and said that the large deficits in the economies operating under the single-current puts carries an additional burden on monetary policy. Moreover, the ECB pledged to “provide liquidity support to the banking system,” while gradually phasing out its emergency measures, and went onto say that its decision to tighten its terms of lending will “ help to avoid distortions associated with maintaining non-standard measures for longer than needed.” At the same time, Governing Council member Yves Mersch said that the push for a European Monetary Fund is nothing more than “a lot of fantasy,” and cautioned on using “central bank money to bail out fiscal deficits.”

The greenback was mixed across the board, with the USD/JPY crossing back above the 50-Day SMA (90.50) to reach a high of 90.55, and risk trends are likely to drive price action going into the North American trade as the economic docket for the U.S. remains fairly light. The trade deficit for the world’s economy is expected to widen to $41.0B in January from $40.2B in the previous month, while initial jobless claims are forecasts to weaken to 460K in the week ending March 6 from 469K. At the same time, continuing claims is anticipated to hold steady at 4500K for the week ending February 27, while the Fed is scheduled to release its Flow of Funds report at 17:00 GMT.

Euro Forecast to Recover Against US Dollar on Options Sentiment