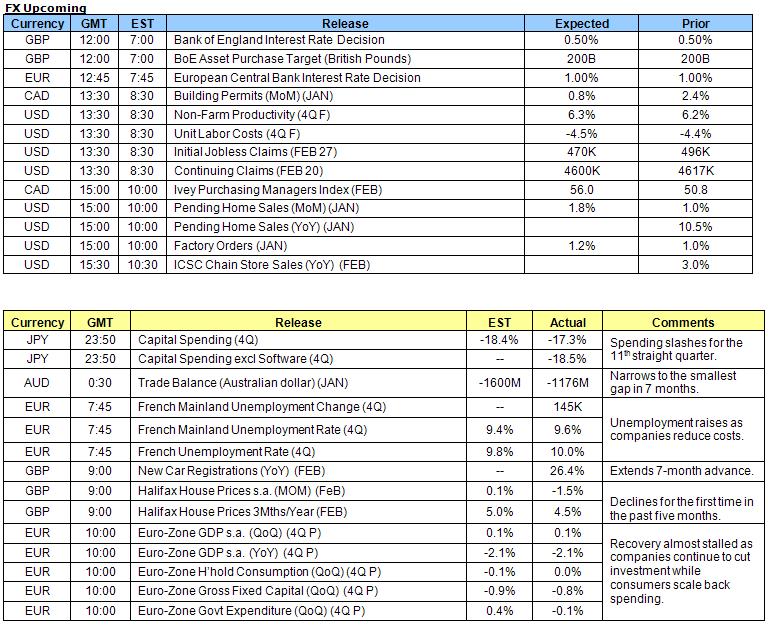 
The British Pound bounced back from the low (1.5022) as the Bank of England held the benchmark interest rate at 0.50% and maintained its asset purchase program at GBP 200B this month, and we may see the exchange rate retrace the sharp decline carried over from the previous weak as the daily RSI rebounds from oversold territory. It seems market participants are scaling back speculation for further easing as the MPC maintains its current policy and keeps its emergency program on pause, but the meeting minutes due out on March 17th is likely to spark increased volatility in the GBP/USD as investors weigh the outlook for monetary policy going forward.

At the same time, the lack of commentary following the rate decision suggests that the central bank did not see any notable changes in the economic landscape and as a result, we may see the MPC maintain a neutral policy stance throughout the first-half of the year as they aim to balance the risks for growth and inflation. However, as policy makers continue to see a risk for a protracted recovery, the BoE may keep the option to expand its asset purchases over the coming months as the interest rate remains at the record-low, and speculation for further easing is likely to weigh on the exchange rate as central banks across the major industrialized countries aim to normalize policy this year. Meanwhile, a report by Halifax showed home prices unexpectedly weakened for the first time in eight-months, with the index slipping 1.5% in February amid expectations for a 0.1% rise, while a separate report showed new car registrations jumped at an annual pace of 26.4% during the same period after expanding 29.8% during the previous month.

The Euro tipped lower during the overnight trade as investors scaled back their appetite for rise, while the European Central Bank held the benchmark interest rate steady at 1.00%, but the single-currency is likely to face increased volatility going into the U.S. trade as President Jean-Claude Trichet is scheduled to hold a press conference at 13:30 GMT. Meanwhile, the preliminary 4Q GDP reading showed economic activity expanded 0.1% from the previous three-month period, led by a 0.8% drop in business investments, which was largely in-line with expectations. However, the breakdown showed government spending unexpectedly slipped 0.1% amid forecasts for a 0.4% rise, while household consumption held flat despite projections for a 0.1% decline. As policy makers anticipate to see an “uneven” recovery this year, the ECB is likely to hold a dovish outlook for future policy, and we may see the Governing Council maintain a neutral stance throughout the first-half of the year as price pressures remain subdued.

U.S. dollar price action was slightly mixed overnight, with the USD/JPY tipping lower for the third-day to reach a fresh yearly low of 88.13, and we may see the reserve currency face increased volatility going into the North American trade as the economic docket is expected to reinforce an improved outlook for future growth. Pending home sales in the world’s largest economy is projected to increase 1.0% for the second consecutive month in January, while factory orders are anticipated to expand 1.8% during the same period after growing 1.0% in December. At the same time, initial jobless claims are expected to weaken to 470K in the week ending February 27 following the unexpected jump to 496K during the prior week, while continuing claims are forecasted to average 4600K for the week ending February 20 from 4617K.


Will EUR/USD Price Action Continue to Hold Below the 20-Day SMA? Join us in the Forum