The British Pound tumbled lower during the European trade even as the preliminary 4Q GDP report reinforced an improved outlook for the U.K., and the bigger-than-expected rise in the growth rate is likely to lead the Bank of England to hold a neutral policy stance next week as the expansion in monetary and fiscal policy continues to feed through the real economy. A Bloomberg News survey shows all of the 31 economists polled forecast the MPC to keep its asset purchase program on pause and to maintain the benchmark interest rate at 0.50%, but any commentary following the rate decision on Thursday could shake up the currency market as investors weigh the prospects for future policy.

Economic activity in the U.K. expanded 0.3% in the fourth quarter, which exceeded expectations for a 0.2% rise in the growth rate, while the annualized rate slipped 3.3% from the previous year amid an initial forecast for a 3.2% drop in GDP. The breakdown of the report showed private consumption increased 0.4% to top forecasts for a 0.3% rise, with government spending surging 1.2%, while capital investments unexpectedly slumped 3.1% from the previous three-month period. At the same time, exports jumped 3.7%, while imports grew 4.1% during the fourth quarter, which fell short of expectations for a 4.6% advance, while a separate report showed service-based activity increased 0.5% during the three-months through December to mark the biggest expansion since the first quarter of 2008. However, a report by Nationwide showed home prices slipped 1.0% in February after rising a revised 1.4% in the previous month, while the annualized rate increased 9.2% from the previous year amid expectations for an 11.0% rise.

The Euro advanced against the greenback for the third-day, with the exchange rate rising to a high of 1.3629 during the overnight trade, but the lack of momentum to cross back above the 20-Day SMA at 1.3680 is likely to keep the single-currency within the downward trending channel from the January high (1.4581) as the European Central Bank continues to see a risk for a protracted recovery. Nevertheless, consumer prices in the Euro-Zone weakened 0.8% in January after rising 0.3% in the previous month, while the annualized rate increased to a 1-year high of 1.0% from the previous year. However, the core rate slipped to 0.9% from 1.1% in December, which exceeded expectations for a drop to 1.0%, and subdued price growth is likely to lead the Governing Council to hold a dovish policy stance next week as they maintain their one and only mandate to ensure price stability.

The greenback weakened against most of its currency counterparts during the overnight trade, while the USD/JPY halted the five-day decline and advanced to a high of 89.51 as investors raised their appetite for risk. As equity futures foreshadow a mixed outlook for the U.S. market, with trading liquidity thinning ahead of the weekend, we may see the major currencies maintain a narrow range going into the North American session. Nevertheless, the preliminary 4Q GDP reading for the U.S. is expected to show a 5.7% rise in the growth rate, with private consumption increasing 2.0%, while a separate report is expected to show a 0.9% rise in existing home sales.


Will the EUR/USD Hold the Broad Range From the Previous Week? Join us in the Forum

Volatility Behind the Dollar, Dow and Risk Appetite Increases but a Clear Direction Still Absent 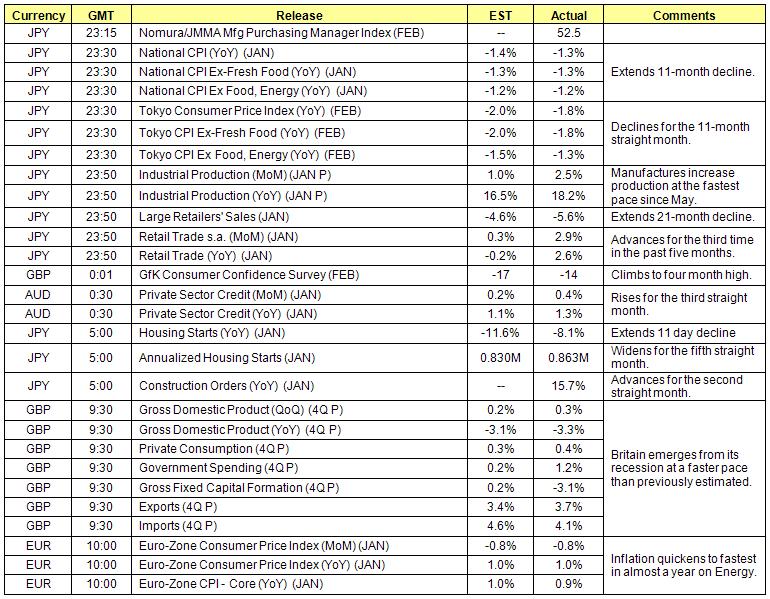