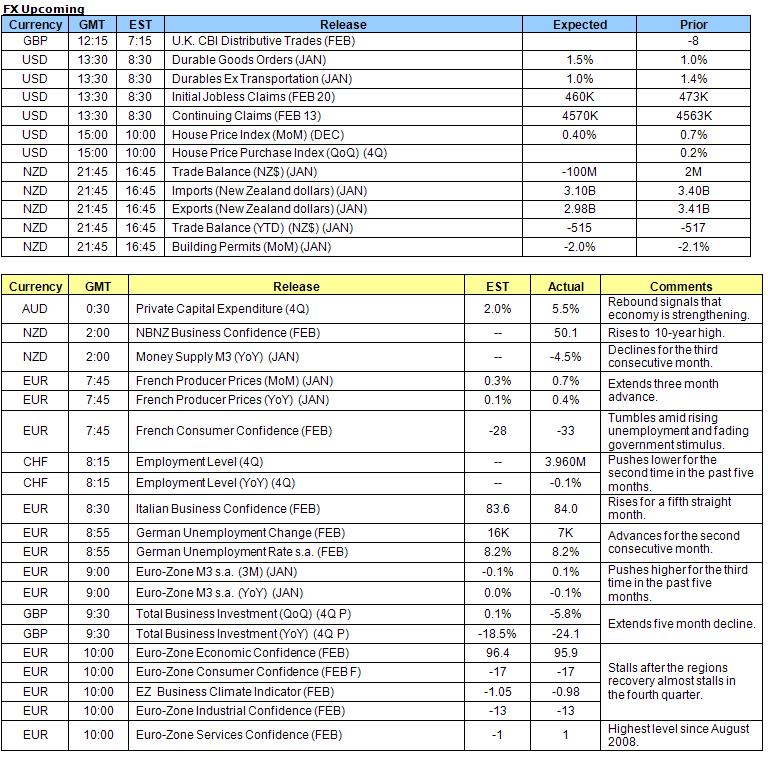 
The British Pound tumbled to a fresh yearly low 1.5272 during the overnight trade as the economic docket reinforced a weakened outlook for the U.K., and fears of a protracted recovery may lead the Bank of England to maintain a dovish outlook for future policy as growth prospects remain subdued. Meanwhile, BoE Governor Mervyn King said that the ongoing weakness in bank lending “reflects both supply and demand” during a speech in London, and saw a need for a “long transition period” to reform financial regulations as policy makers continue to shore up the banking sector.

Moreover, the central bank head noted that its asset purchase program “should both increase the demand for investment and bank borrowing,” and went onto say that the “heart of problem comes down to the inherent riskiness” in the current structure of the banking industry. Nevertheless, the economic docket showed business investments in the U.K. unexpectedly slipped 5.8% in the fourth-quarter after falling a revised 1.8% during the previous three-month period, while the annualized rate weakened 24.1% from the previous year, which exceeded expectations for an 18.5% decline. As the data instills a dour outlook for future growth, the BoE may look to increase the scope of its emergency program over the coming months, and may keep the benchmark interest rate at the record-low of 0.50% going into the second-half of the year as policy makers aim to encourage a sustainable recovery.

The Euro tipped to a low of 1.3451 as investors scale back their appetite for risk, and we may see the exchange rate maintain the downward trending channel from earlier this year as the U.S. dollar continues to benefit from safe-haven flows. However, we saw muted reaction to the German labor data even as job losses increased 7K in February amid expectations for a 16K rise, while the annual rate of unemployment increased to 8.2% from a revised 8.1% in January. However, there was a slight bounce in the exchange rate as the Euro-Zone business confidence index increased to -0.98 during the same period to mark the highest reading since October 2008, while the gauge for economic sentiment unexpectedly weakened to 95.9 from a revised 96.0 in the previous month. As the recovery appears to be tapering off from the previous year, the European Central Bank is widely expected to hold borrowing costs at the record-low throughout the first-half of the year, and the central bank may sit pat for an extended period of time as the Governing Council maintains its one and only mandate to ensure price stability.

The greenback strengthened against most of its major counterparts following a rise in risk aversion, while the USD/JPY extended the decline from earlier this week, which suggests investors are resorting to the Japanese Yen as their main funding-currency. Meanwhile, the economic docket is likely to stoke increased volatility in the U.S. dollar as economists forecast demands for durable goods to increase 1.5% in January, while the home price index is projected to rise 0.4% in December after climbing 0.7% in the previous month. Nevertheless, as equity futures foreshadows a lower open for the U.S. market, a rise in safe-haven flows is likely to push the greenback higher as risk trends continue to dictate price action in the foreign exchange market.


Will the EUR/USD Hold the Broad Range From the Previous Week? Join us in the Forum

Dollar Awaits a Clear Read on Risk and Rate Forecasts