Gold Price Gets Reprieve on US Dollar Pause Ahead of ECB. Will XAU/USD Turn?

The price of gold has managed to stay above US$ 1710 so far today as the US Dollar appeared to take a break from its upward trajectory of late.

The Canadian Dollar has held steady so far today in the aftermath of a 75 basis point hike from the Bank of Canada overnight. The central bank

Reserve Bank of Australia Governor Phillip Lowe hinted that future rate rises may not be as aggressive going forward. He said, “we recognise that, all else equal, the case for a slower pace of increase in interest rates becomes stronger as the level of the cash rate rises.”

The yield on the 3-year Australian Commonwealth government (ACG) bond dipped 16 basis points and the Australian Dollar sunk to a low of 0.6712 from 0.6745 prior.

Earlier in the day, Australian trade data missed forecasts, coming in at AUD 8.7 billion instead of AUD 14.6 billion anticipated. Lower iron ore and other commodity prices appear to have taken their toll.

The Japanese Yen took back some ground today after GDP data came in better than expected. USD/JPY dipped back below 144 after final annualised GDP printed at 3.5% to the end of July, beating forecasts of 2.9% and 2.2% previously.

The WTI futures contract is near US$ 83 bbl while the Brent contract is approaching US$ 89 bbl.

The release of the US Energy Information Administration’s (EIA) weekly report will be watched closely later today.

The ECB is set to raise rates by 75 basis points today, according to a Bloomberg survey of economists. The overnight index swaps (OIS) market is slightly less convinced, pricing in a lift of around 67 bps. EUR/USD has benefitted from the broader ‘big dollar’ weakness, currently a touch below parity.

A bigger picture descending trend channel remains intact for gold for now. Resistance could be at the 21-day simple moving average (SMA), currently 1741, or at the previous high of 1765. 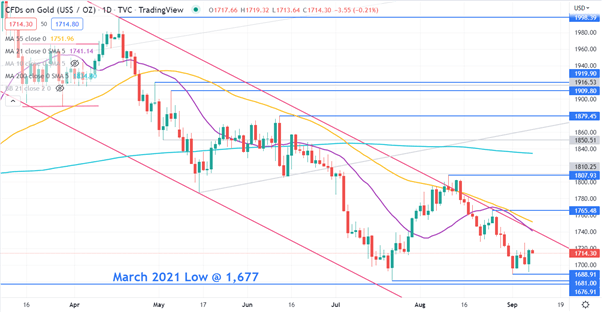