Euro Trapped in a Range Despite Broad US Dollar Weakness. Will EUR/USD Breakout?

The Euro has struggled to break free of recent ranges despite widespread US Dollar frailties in most other currency pairs. The issues emanating out of the Ukraine war appear to be impacting the single currency.

USD/JPY continues to sink to lows not seen since mid-June as the yield differential between Treasuries and Japanese Government bonds (JGBs) narrows.

The Aussie and Kiwi are also big gainers in Asia today after Australian PPI came in hotter than expected at 5.6% year-on-year to the end of the second quarter.

GBP/USD is at a 1-month high while USD/CHF is eyeing off a 3-month low.

Wall Street finished their cash session on a positive note with the main indices up over 1%.

Disappointing US GDP figures led to the market looking for a less hawkish Fed going forward with the perception that inflationary pressures might be easing. A classic case of bad news being seen as good news.

Treasury Secretary Janet Yellen hit the wires and noted that inflation is unacceptably high and that tackling that is the administration’s top priority.

The positive lead from North America helped Australian and Japanese equities move into the green but Chinese and Hong Kong bourses are being weighed down.

A lack of stimulus measures announced at the conclusion of today’s politburo meeting left the market vulnerable. Hong Kong’s Hang Seng Index (HSI) is at a 2-month low.

Commodities have been generally drifting higher with the softening dollar, but iron ore eased off today, based on concerns of the state of the Chinese economy. Gold and crude oil have been steady so far today, holding onto recent gains.

US futures are pointing toward a robust start to trading after Apple and Amazon reported solid earnings after the close.

A 2-hour phone call between US President Joe Biden and Chinese President Xi Jinping on Thursday was describes as ‘candid and substantive’. Plans are being hatched for an in-person meeting amid a backdrop of rising tensions over Taiwan.

After a stack of Euro area GDP and CPI numbers, Canada will also see GDP figures. With the labour market still quite tight in the US, the payrolls report there later today will be closely watched.

The 10-day simple moving average (SMA) has crossed above the 21-day SMA to form a Golden Cross. This could indicate that bearish momentum is being challenged. 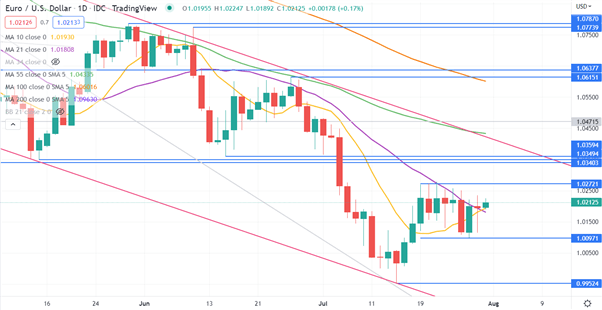