Gold continues to struggle to lift off from recent lows despite the US Dollar moving lower this week. The USD (DXY) index is down around 1.3% so far this week while gold has only eked out 0.3% gains so far.

The weaker US Dollar is attributed to a number of factors that have also boosted equity markets as well as growth and commodity linked currencies.

The market has scaled back the possibility of the Fed raising rates by 100-basis points and instead expects 75 bps next week. The move away from havens is perhaps best illustrated by the benchmark 10-year Treasury yield moving back above 3%.

The equity market appears to have been supported by a perception that perhaps all the bad news is known.

Netflix got a lift when they announced that they lost fewer subscribers than the market had forecasted. Twitter also gained after a judge allowed them to fast a lawsuit against Elon Musk.

Corn and Soybeans are lower this week on favourable weather forecasts in the US. Wheat is slightly higher after Egypt cancelled a tender and is seeking to restock silos.

The recent slide in the iron price steadied today after mining giant Vale SA announced that they will reduce iron ore production. Steel also found some support while other base metals are relatively unchanged through the Asian session.

China held rates steady despite speculation that the 5-year loan prime rate (LPR) might have been reduced to allay discontent from mortgage holders of unfinished projects. There is growing anxiety that the impacts of Chinese builders defaulting could spread from developers and financial markets and onto main street.

Gas flow uncertainty through Nordstream 1 pipeline remains as Europe aim to reduce gas consumption by 15% amid fears that Moscow might cut gas supplies in the next winter.

Crude oil eased today with the WTI futures contract below US$ 104 bbl and the Brent contract leaking under US$ 107 bbl.

EUR/USD went higher on growing speculation that the ECB will go for a 50 bp hike on Thursday. The market is split between 25 and 50 bps with 37.5 bps priced into the overnight index swap (OIS) market.

AUD/USD is higher after RBA Governor Philip Lowe spoke today and reaffirmed the need to tackle inflation now to avoid much higher interest rates further down the track. Details of a review into the RBA was announced at the same time.

Gold remains in a descending trend channel and has remained in a tight range since making a low at 1697 last week. That level might provide support if tested again. Below that, the March 2021 low of 1677 may also provide support. 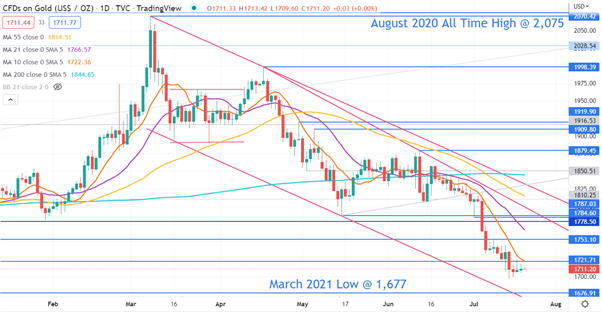