DXY Dollar Index Rock Solid Amid Market Mayhem Ahead of the Fed, BoE and BoJ

The US Dollar made a 20-year high as markets are still recalibrating in the aftermath of last Friday’s mind-blowing US CPI number.

Some risk assets had some reprieve today with the Aussie, Kiwi and Sterling the notable gainers as markets take a breather ahead of what is shaping up to be a hectic week with many central banks’ meetings.

A 50 basis-point (bp) hike by the Federal Reserve may not be enough to allay market worries of an inflation freight train gathering steam.

The entire Treasury yield curve has screamed upward on concerns that rates are going to need to go much higher than anticipated to get the inflation genie back in the bottle. This boost in US yields has underpinned the US Dollar.

The benchmark 10-year note is delivering its highest return in 11-years, trading as high as 3.44% in the US session and remains above 3.30% in Asia today.

The 5/30’s yield curve has inverted to its lowest level since September 2000. This highlights the market concern that rates will have to be lifted so high in the near term that there will be long-term damage to the economy.

The Bank of England (BoE) is facing a slowing economy at a time when it too is seeing uncomfortably high inflation. Market expectations of a 50 bp rate rise from them remain.

Going the other direction, the Bank of Japan (BoJ) has committed to buying more Japanese government bonds (JGBs) on Wednesday, after amending its yield curve control (YCC) earlier today to broaden the maturity range beyond the 10-year JGBs it was targeting previously.

In an unscheduled operation, the BoJ have said that they will be buying JGBs in the ultra-long part of the yield curve. JGB 30-year yield hit 1.26% today, its highest in 6-years. USD/JPY remains steady below 135 after making a 24-year high at 136.19 yesterday.

So, while the Fed and BoE are set to tighten, the BoJ appear likely maintain ultra-loose monetary policy.

Equity markets remain under pressure overall, but futures are pointing to a slight uptick for the start of the European and North American cash sessions.

Australia’s ASX 200 was pummelled after returning from a holiday Monday and catching up with the carnage, down over 5% at one stage.

Bitcoin has also been caught up in the risk aversion. It has traded below 21,000 today.

Commodities markets are reasonably tame by comparison, although agricultural markets are softer as a result of demand destruction fears.

Crude oil is also steady with supply woes somewhat offset by China lockdowns and recession fears. Gold lost its lustre overnight, but is but has held its ground in Asia, trading near US$ 1,825 an ounce.

After UK jobs data and German CPI, the US will see PPI numbers.

The DXY has eclipsed last month’s peak to make a fresh 20-year high today. The next historical high that may offer resistance is at 109.77 from September 2002.

Momentum appears to be bullish with positive gradients on all short, medium and long-term simple moving averages (SMA)

Making this high saw the price move outside the upper band of 21-day SMA based Bollinger Band.A close back inside the band could indicate a potential reversal. 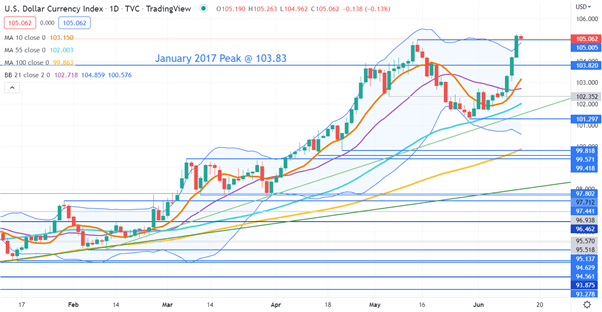