Crude oil made a 2-month high today with the WTI futures contract trading as high as 120.99 US$ bbl and the Brent contract reaching US$ 121.95 bbl early in the Asian session. Both have since eased off more than a dollar.

Last week, OPEC+ members agreed to lift daily production quotas, but it seems apparent that the cartel will be unable to hit their targets. The fall in US inventories revealed by the Energy Information Administration (EIA) on Thursday has also underpinned crude.

Today, Saudi Aramco raised the price for their Asian customers while they kept the price steady for their US clientele. The lift of US$ 2.10 bbl was more than anticipated.

Gold is up a touch, trading around US$ 1856 an ounce with the US Dollar easing.

APAC equities mostly shrugged off Friday’s negative returns on Wall Street and started the week with a boost from the easing of Covid-19 related restrictions in China. Hong Kong’s Hang Seng and the mainland’s CSI 300 indices saw the bulk of the gains in the region.

Japan’s Nikkei 225 index was also in the green, but Australia’s ASX 200 was slightly softer ahead of tomorrow’s RBA rate decision.

The market is divided between a 25 or 40 basis-point (bp) hike. The RBA have historically moved in blocks of 25 bps but meeting minutes revealed that they considered a 40 bp move in May.

The Australian Dollar is a little lower to start the week and the Japanese Yen is a bit firmer. Currencies have had a quiet Monday despite a generally positive attitude to risk in other markets.

It’s shaping up as a quiet start to the week data wise. After the RBA tomorrow, the ECB will be making their own rates decision on Thursday.

WTI cleared resistance levels to make a 2-month high today. It is nudging the upper band of the 21-day simple moving average (SMA) basedBollinger Band but is yet to pierce above it.

This could suggest that the market is accepting of the higher level for now. The price remains above all period SMAs which may see further bullish momentum evolve. 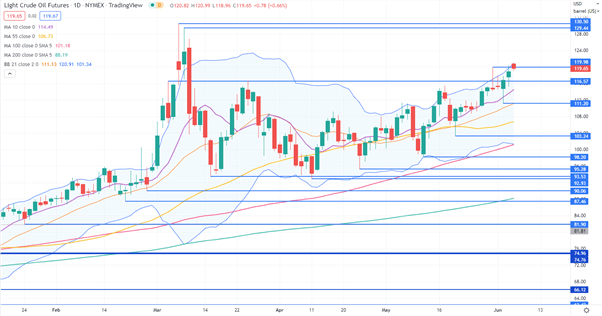