This could potentially open the way for other member nations to increase production, something that the US and Europe would welcome. The capacity for additional production from these other countries remains under a cloud.

Wall Street’s negative day session fed into Hong Kong’s Hang Seng index (HSI) but the rest of APAC equity indices were either flat or slightly positive. Futures are pointing to a good for start for the North American session.

Australian 4Q quarter-on-quarter GDP came in at 0.8% against forecasts of 0.7% and a previous 3.4%. The annual read to the end of March was 3.3% instead of 3.0% anticipated and 4.2% prior. It reveals upward revisions to previous quarters.

Despite this, the Aussie languished after a rally prior to the release, although the Japanese Yen was the notable under performer through the Asian session.

The private Chinese Caixin purchasing managers index (PMI) for May underwhelmed market expectations, coming in at 48.1 rather than 49.0 forecast.

Focus will turn toward a plethora of European PMIs due out today and Europe wide unemployment data will also be released. Yesterday saw preliminary harmonised European inflation come in at 7.3% year-on-year to the end of May, higher than the 6.7% expected.

The market is now looking toward the ECB for hints on when rates will lift-off there. There are several ECB speakers today and their comments will be closely watched for clues.

US President Joe Biden met Fed Chair Jerome Powell yesterday and said that the Fed should be respected and re-iterated its independence in its fight on inflation.

Treasury yields maintained their march north and the US Dollar subsequently found support through the Asian session today.

The Bank of Canada are meeting to make a decision on rates today. The market is looking for them to raise by 50 basis-points to 1.50%.

WTI crude made a 2-month high yesterday, but it was unable to hold the gain.

On that move it poked above the March peak of US$ 116.64 and the upper band of the 21-day simple moving average (SMA) basedBollinger Band before retreating. 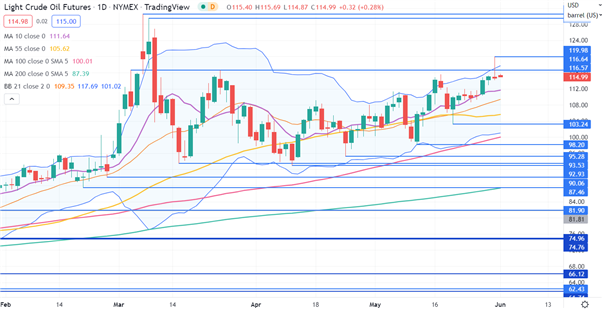