EUR/JPY traded at its highest level since 2015 despite the European Central Bank (ECB) disappointing markets last week at its monetary policy meeting. The bank was less hawkish than expected as the Ukraine war continues to undermine European growth.

USD/JPY has continued to march to a 20-year high, breaking all sorts of records. Japan’s Finance Minister Shunichi Suzuki rolled out a familiar mantra about Yen weakening, which had little impact.

Overnight, Treasury yields inched higher across the curve, highlighting the divergence between Japanese and US interest rate markets.

The Bank of Japan is persevering with yield curve control, with the benchmark 10-year Japanese government bond (JGB) trading just below 0.25%. The US 10-year note is currently near 2.85%.

Renowned Fed hawk James Bullard kept up his tightening credentials, opening the door to a possible 75 basis-point (bp) hike at some stage this year to get the Fed funds rate back to “neutral”.

The Australian Dollar reversed some of the overnight losses on the release of the RBA meeting minutes. They revealed the central bank to be a bit more hawkish than the market had read into this month’s post-meeting statement.

The rest of the major commodity-related currencies – CAD, NOK and NZD – joined the Aussie higher.

Crude oil held onto recent gains, with the WTI futures contract trading near US$ 107 bbl and the Brent contract near US$ 113 bbl. Gold remains steady just under US$ 1,980 an ounce.

Tiny losses in the Wall Street cash session have been erased in the futures market in Asia today. Contracts tracking major US stock market benchmarks – the Dow, S&P 500 and Nasdaq – are now pointing to small gains on the open. Hong Kong and mainland Chinese equity indices went south on the back of further Covid-19 lockdowns. Japanese and Australian equities were in the green.

Looking ahead, US and Canadian housing starts data will be released and there will be commentary from a number of key central bankers that will be crossing the wires.

Bullish momentum appears to have re-asserted itself with the gradient of the 10-day simple moving average (SMA) steepening again after a week or so of flatlining. 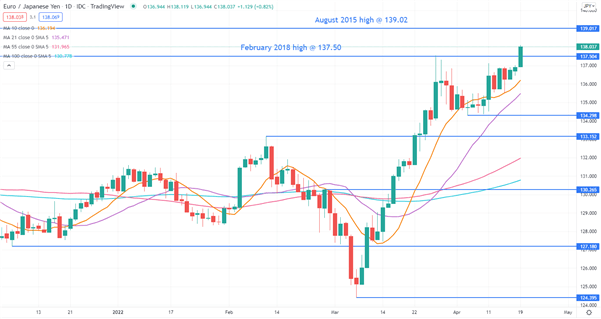