Euro Challenged as US Dollar Skips Up on Higher Treasury Yields. Where to For EUR/USD?

The Euro opened the week higher in thin liquidity to start the Asian session today. Although not confirmed at the time of going to print, the news of a likely outcome in the French election helped to alleviate uncertainty.

Data out of China saw both the PPI and CPI come in slightly above expectations at 8.3% and 1.5% respectively. Covid-19 shutdowns continue to dominate mainland Chinese and Hong Kong equity indices, with bourses there down over 2%.

With the People’s Bank of China (PBOC) set to loosen policy further and the Fed going in the opposite direction, the US 10-year Treasury yields inched above China’s 10-year note for the first time since June 2010. It is currently yielding above 2.75%.

Higher US yields has boosted the US Dollar, with the commodity block of AUD, CAD, NOK and NZD losing ground in Asia today. Crude oil is down again, with the WTI futures contract near US$ 96 bbl and the Brent contract around US$ 100.50 bbl. Gold is steady, trading close to US$ 1,943 an ounce.

The worst performing currency has been the Japanese Yen. It went further backwards after some jawboning from Bank of Japan (BoJ) executive director Shinichi Uchida.

He made the usual comments that Japanese officials have taken on as a mantra of late. These phrases include - FX prices should reflect underlying fundamentals, they (BoJ) are closely watching the impacts of FX on the economy and that it’s desirable for FX to move in a stable manner.

The Japanese Nikkei 225 went south, while Australia’s ASX 200 was pretty much flat on the day.

The Chicago Board of Trade (CBOT) wheat futures contract finished stronger last week, and it has made a 2-week high on Monday. This comes on the back of the US Department of Agriculture’s World Agricultural Supply and Demand Estimates (WASDE) looking at supply issues from the Ukraine due to the war.

The US harvest is also expected to be one of the lowest on record and a drought in Argentina is exasperating the situation. Australia’s bumper crop may offset some of the short fall. Most other soft commodities are higher to varying degrees.

Looking ahead, earnings season starts this week and the market will be watching for reports from the big banks, particularly Citigroup, JPMorgan Chase, Goldman Sachs, Morgan Stanley and Wells Fargo. Comments from Chicago Federal Reserve President Charles Evans will also be crossing the wires. EU foreign ministers are due to meet to discuss further sanctions against Russia.

EUR/USD moved lower last week and tried to run higher to start this week but failed again to overcome pivot point resistance at 1.0944.

Further up, potential resistance could be offered at the 10-day simple moving average (SMA) currently at 1.0977. 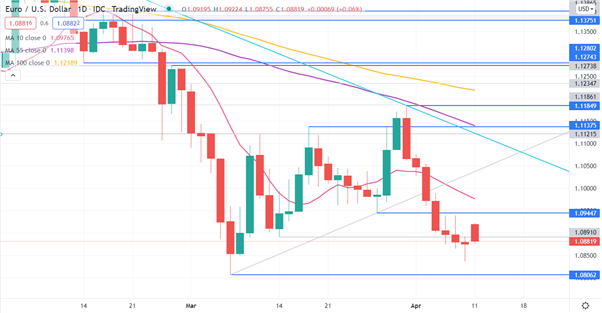