Crude Oil Slips on Fed Fallout as the West Talk Tough on Sanctions. Where to for WTI?

WTI crude sunk over 5% in the US session after the International Energy Agency (IEA) released over 60 million barrels from the strategic petroleum reserve (SPR). This is on top of the previously announced White House release of oil.

Russian sanctions continue to plague the supply side, with the US calling out India over their ongoing purchases. On the demand side, the expanding shut down of Shanghai due to Covid-19 has observers concerned of the impact of a reduction of Chinese oil imports.

A swathe of potential further restrictions on Russian trade have been announced by US President Joe Biden and the European Commission President Ursula von der Leyen in the last 24 hours.

The Federal Reserve meeting minutes continue to be digested by markets after the revelation of a more hawkish stance than previously thought. Most notably, a 50 basis-point (bp) hike at the last meeting was on the cards, except for the outbreak of the Ukraine war.

Additionally, quantitative tightening is likely to be swift, with eventual sales of US$ 95 billion per month being slated. Fed watchers were looking for US$ 80-100 billion.

The Treasury curve generally steepened on the news, with all tenures beyond 7-years seeing higher yields, while 5-years and less saw rates drop to varying degrees.

As a result, the yield sensitive Japanese Yen depreciated into the North American close but has steadied in Asia.

The Australian Dollar has continued to slide lower after disappointing trade data revealed an AUD 7.46 billion surplus for the month of February, instead of AUD 11.65 billion anticipated. The Kiwi and the Loonie were dragged lower with it.

With tighter conditions coming from the Fed, all equity indices in Asia are in a sea of red. Futures are pointing to a tough day for European and US bourses as well.

With the aforementioned Shanghai shutdown unfolding, the Peoples Bank of China (PBOC) have indicated loosening policy is ahead as they swim up stream to the Fed.

The Chinese government is also expected to announce a series of stimulus measures to support their 5.5% growth target.

The US will seem initial jobless claims later. While ECB and BoE speakers will hit the wires, the market focus will be on the Fed’s Bullard and Bostic to hear more about the hawkishness sweeping the central bank.

Since the peak in crude oil at 130.50 a month ago, the price has consolidated in wide ranges.

Yesterday it moved below the 55-day simple moving average (SMA) for the first time since the start of the year. With the price now below the 10-, 21- and 55-day SMAs, this could indicate the bullish momentum has paused and some short- and medium-term bearishness may evolve. 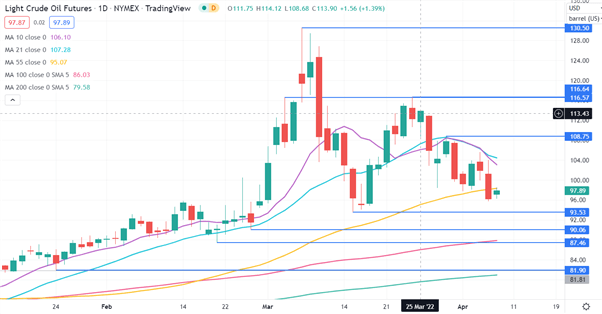