The US Dollar Index (DXY) Sinks as Fed Hikes Might be Overcooked. Will USD Recover?

The US Dollar has come under pressure as the market re-appraises prospects of 5 rate hikes from the Fed for 2022.

Fed Presidents Daly, Harker and George all see less than 5 hikes this year. Kansas City Fed President Esther George acknowledged that a prompt end to QE may open the way to a more gradual increase in rates.

All four Fed speakers appeared to be backing away from a 50-basis point lift off at the March FOMC meeting.

Currency and commodity markets were quiet through the Asian session with many parts of the region on Chinese Lunar New Year holidays. Treasuries also had a lacklustre session.

Japanese and Australian equity markets saw healthy gains after a positive lead from Wall Street. Japan’s Topix index was the best performer, up over 2%.

Alphabet Inc. (Google) reported earnings after hours and recorded a large beat on estimates. This has boosted the Nasdaq futures contract and it is pointing toward a 1% open for the cash session.

In a speech today, RBA Governor Philip Lowe re-iterated the position of the central bank disclosed at their monetary policy meeting yesterday.

That is that rate hikes were not necessarily the next step after abolishing their asset purchase program. AUD/USD was little moved, maintaining yesterday’s gains.

Crude oil continues to trade near 6.5-year highs as the OPEC+ meeting approaches later today. There is market speculation that the cartel could add to output supply targets to curtail price pressures.

Looking ahead, after a series of European CPI numbers, the US will see jobs data, factory and durable goods orders, as well as some PMI numbers.

The US Dollar index (DXY) finished last week at its highest level since July 2020. Friday’s close was above the 21-day simple moving average (SMA) based Bollinger Band.

Tuesday’s close was back inside the Bollinger Band. This could indicate a pause in bullishness or a potential reversal.

When it made the high on Friday, a potential bearish spinning top candlestick was formed. This may signal a pause or a potential reversal in the bullish trend. 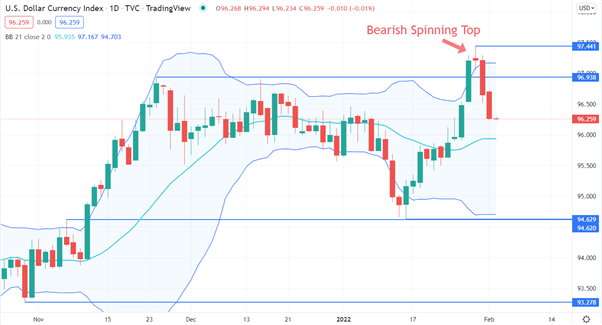